A Guruve solar project worth US$4,75 million is expected to feed 10 megawatts into the national grid this year, with two megawatts ready to be connected in May.

The project under New Sahara Ventures is one of the biggest projects in the district expected to light up Guruve and Mbire districts.

New Sahara Ventures is enjoying a tax and rate holiday and the investor will also contribute five percent to community share ownership.

The first phase of two megawatts was expected to be connected into the national grid on March 27 this year, but was stalled after a transformer in transit from South Africa was damaged in an accident.

Guruve RDC chief executive Mr Tinos Marisa said the solar project is one of the biggest projects which will also benefit Mbire district in power supply.

“The project was started in 2018 in collaboration with the local authority. The target is to generate 10 megawatts and feed into the national grid,” he said.

“The project is being done in phases with the first stage to generate two megawatts. The company was moving at a tremendous speed,  but unfortunately last month they reported that the transformers were damaged in transit from South Africa.

“They are importing more transformers which are expected on the ground by the end of this month. So by the end of May they are ready to connect to the national grid.”

Mr Marisa said thus all areas fed by the sub-station including Mbire will experience no load shedding between 6.30am and 7.30pm.

He added that the district is giving the investor maximum support because power is needed in the country. 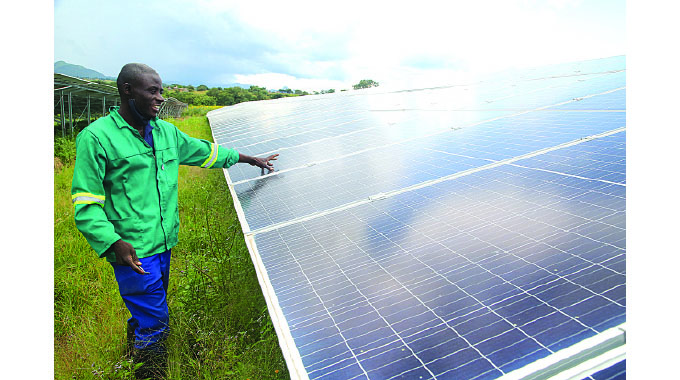 “We gave the investor a grace period to pay rates and unit taxes to the council. They will pay once power is fed into the national grid and payments will be backdated to September last year.

He said the solar park developers are graduates from the University of Zimbabwe.

“They had experiences in developing solar energy from various countries and they have come back to give back to their community,” he said.

“We urge other graduates abroad to come back and invest in the country because Zimbabwe can only be built by its owners.”

Guruve Solar Park founder Mrs Sithabile Chindondondo who is based in Guruve said they started the project with her two female friends.

“Apart from being resident in Guruve, this district was chosen for the project because it is receptive to developmental projects,” she said.

“Panels on site and construction of the substation which will evacuate the power into the national grid is almost complete.

“This is a licensed project by ZERA, but the site can take up to 10 megawatts. Guruve and Mbire will be beneficiaries of this project and a community trust will participate in profit sharing from the plant.

“The profit will go into developmental projects in the community like solar-powered boreholes, clinics and irrigation schemes. The future is green, Zimbabwe has abundant sun as a resource and the country has potential of exporting power in the region.”