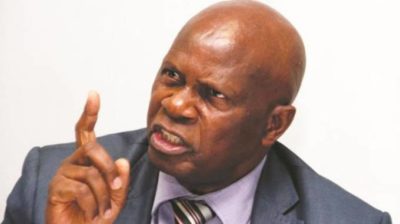 Zanu PF has accused its ministers of leaking confidential Cabinet minutes to “hostile” countries such as the United Kingdom amid allegations of a rift between President Emmerson Mnangagwa’s appointees and the ruling party’s heavyweights.

Chinamasa said the leaked minutes had in the past become part of discussions in the British Parliament.

“It is very clear that some people are receiving advice from their colonial masters. They oppose everything,” Chinamasa said.

“They disregard the Official Secrets Act and now publish cabinet minutes to their colonial masters.

“If you want to investigate this issue, journalists you can get it.

“Right now the British Parliament discusses our Cabinet minutes in their Parliament. We know that they work with the British.”

The former Justice minister refused to name the ministers that allegedly leak minutes after he was pressed by journalists.

British parliamentarians from time to time raise issues about human rights violations in Zimbabwe and the political crisis.

Zimbabwe’s former coloniser has of late taken a tough stance against Mnangagwa’s administration after initially warming up to the 77-year-old ruler when he seized power from former president Robert Mugabe in a military coup.

Chinamasa’s claims followed repeated allegations that former ministers that were deployed to Zanu PF headquarters after Mnangagwa left them out of his Cabinet in 2018 are involved in a tug-of-war with new ministers over supremacy.

The Zanu PF heavyweights want to dictate government policy, arguing that the party is supreme.

Chinamasa also appeared to be leaning on Local Government minister July Moyo to meddle in the affairs of Chitungwiza Town Council.

“Zanu PF is demanding the reinstatement of the town clerk, George Makunde, who was removed by the MDC mayor to facilitate their corrupt activities,” he said.

“Zanu PF considers the suspension of the town clerk to be null and void.

“The appointment of the disciplinary board and the prosecutor was done without following laid-down procedures.

“Zanu PF is demanding that the acting clerk, the director of works and director of housing be suspended forthwith pending finalisation of their cases where they are being accused of abuse of office and corruption.

“Zanu PF is calling on the minister of Local Government July Moyo to exercise his powers and rescind all Chitungwiza Town Council resolutions passed by the MDC-led council to embed systemic corruption within council affairs.”

Makunde was suspended in December last year after he was allegedly implicated in the illegal selling of commercial stands.