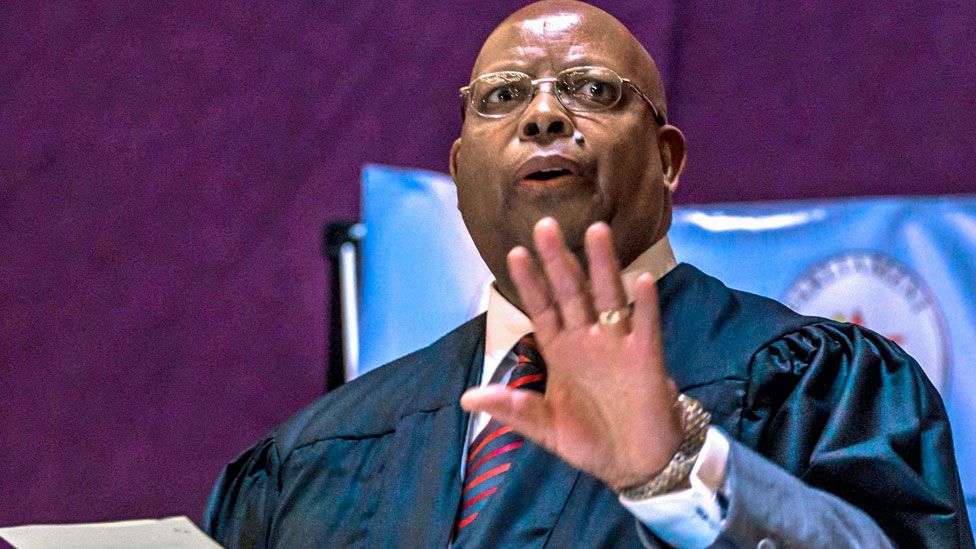 She was among the 32 shortlisted candidates who were interviewed for possible appointment to serve as commissioners.

In view of her controversial appointment by President Emmerson Mnangagwa as a Zec commissioner on Thursday this week, The NewsHawks publishes below – in the public interest – the unedited excerpts of her interview:

Mudenda (pictured): Mrs Ambrose Mohadi, you are here to answer six questions in the next 15 minutes. Please may you remove your mask so that we can hear you properly.

First question is why should this committee recommend you for a possible appointment to serve as a commissioner on the Zimbabwe Electoral Commission?

AMA: Firstly good afternoon honourables. Why should the committee recommend to be a commissioner, because, I’m very patriotic, I’m a unique individual.

Mudenda: Just a second…Madam Ambrose Mohadi, I asked you the first question: Why should this committee recommend you for a possible  appointment to serve as commissioner on the Zimbabwe Electoral Commission?

AMA: Thank you. Ummmm like I just said ummmm, the com, I’d love a recommendation from this committee because I am a very patriotic…

Mudenda: Can you raise your voice please….

AMA: I’m a very patriotic individual who loves this country and would love to serve in this country in whatever capacity I can get. I would say I’m a very well rounded person, which is evident in my CV. I have worked as a, I started my career as a junior accountant in a foreign country, where out of 3 000 interviewees, I made it into a top 12 into KPMG as an auditor from a young age, I progressed through the ranks KPMG and Biggio kingdom in Australia from there, I have done a lot of mission work as a volunteer in other countries in India and in Malaysia. And then when I came back from my studies in when I moved back to Zimbabwe, I ran Vitafoam, which is a manufacturing firm in Bulawayo, making furniture, and beds. I was in charge of over 200 employees, of whom the majority were much older than I was. So with the experience of being an accountant, administrator, the mission work that I have taken part in and as well as doing development as a development. I’m also a development practitioner. I’m also a farmer. So as a development practitioner, I’ve been able to interact with people from different walks of life, engaging with different communities, participating in activities that enhance people’s lives from grassroots all the way to the highest level. So I do not fear people per se but I respect every person from every walk of life through my experience. Hence I believe I would be a good recommendation to Zec because Zec is a participatory commission. Zec engages with all sorts with people from different walks of life and it promotes, it prepares, conducts and supervises elections at all levels, which I have covered in my CV. So, I believe I would be  a good candidate.

Speaker of Parliament ( Advocate Jacob Mudenda ): Second question, why do you think the government of Zimbabwe created the Zimbabwe  Electoral Commission?

AMA: There is  various answers to that question, but I believe initially, when Zec was at its inception it was called the Electoral Supervisory Council of which it was under the Registrar-General and I think because Zec is supposed to be to help with the checks and balances of government, there was a dispute they because they were not part of government under the registry. Hence it had to be an independent commission. So in saying that in saying that its creation is going with the world standards as well that elections need to be free fair and credible, there needs to be transparency, it enhances democracy as well as enhances the human rights for the people of human rights freedoms for the people of this nation. It creates transparency it creates a democracy and makes us world citizens.

Mudenda: Next question: To what extent has the 2013 constitution and the electoral law been implemented since the 2013 elections to date?

AMA: Please may you repeat the question…

Mudenda:  I’ll do so. To what extent has the 2013 constitution and the electoral law been implemented since the 2013 elections to date?

Mudenda: To what an extent?

AMA: Okay in I’ll try to answer it the best way that I understand question. Umm the 2013 constitution….Can I pass I don’t understand the question.

Mudenda: Can I repeat the question. To what an extent has the 2013 constitution and the electoral law been implemented since the 2013 elections up to date?

Mudenda: Can you wind up your response please, so that we move on to the next question.

AMA: And to make sure that citizens grievances are heard and attended to.

Speaker of Parliament ( Advocate Jacob Mudenda ): Ok thank you, the next question is question number eight.

Unnamed MP: Consider that you met a citizen who tells you that registering to vote is not important. Explain how you can convince a person to register and vote.

AMA: In that scenario, I would suggests to them if they know what voting is ,what changes do they expect to come out of a vote? In Isindebele they say (umntwana ongakhaliyo ufela embelekweni)….which means a child who doesn’t cry dies.  So, If they have grievances as a citizen of Zimbabwe, the only way ,not the only way that one of the means they can be heard is if they vote. Voting doesn’t necessarily mean they will win in their favour, but it means they’ve taken the first step to see or to be the change that they want to be. So I would encourage them. And if I have the literature, voting literature to share with them, and teach them what they can do, if they did vote.

Senator Mwonzora: Thank you very much, Mrs Ambrose. What do you understand by electoral delimitation and what are the principles that ensure that the process of delimitation is democratic?

Mudenda: Finished, yes? We go to the next question, question number 11, Honourable Gezi.

Honourable Gezi: Thank you, Mr Speaker Sir. Mrs Ambrose, how would you evaluate the effectiveness of Zec?

AMA: I believe the effectiveness of Zec can be evaluated by if there is an increase in the number of voters if the population feels they are part of the processes of Zec. If there is no not no but if there is fewer disputes after an election. Currently, I think there’s more Electoral Commission is doing a good job because some of the reports that have come from previous elections, there is the Zimbabwe Media Commission which monitors media during elections and gives all political parties a fair a fair ground of fair opportunities to campaign. Ummm in the polling stations, in the last elections, there was translucent boxes, which is showing that Zec is becoming more transparent to an extent, the availability or that when results are counted at a polling station, and all pallet political parties and candidates are all day in the halls counting, and then the results being posted outside the polling station shows that the Zimbabwe Electoral Commission  is actually showing reforms and it’s becoming better in comparison to previously when no one knew about it. However, I would recommend that the commission taps into the voting the youth and gender, Women and gender by providing voters education that is specific to them using mediums that are understandable to them. For example, the medium social media presence of Zec is not as prominent as it should be because looking at it from a young adult’s perspective where we want everything on our fingertips, it’s not readily available to the general public, so in saying that that needs to improve its presence in the social media arena to also get more voters and improve its service provision.