Mugabe’s grip on power tested by sacking of VP 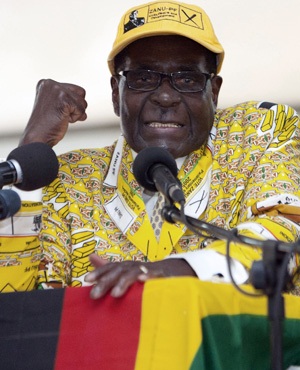 Harare – President Robert Mugabe has exerted almost total authority over Zimbabwean politics for decades – but the sacking of his most senior long-time confidante could spark repercussions beyond his control.

Zimbabwe President and Zanu-PF ruling party leader Robert Mugabe delivers his key note address during the official opening of the 6th Peoples Congress of Zanu-PF in Harare on December 4, 2014. Mugabe sought to shut down a bubbling succession battle at a key party congress, warning that his embattled deputy and onetime heir apparent could face criminal charges.
AFP PHOTO/JEKESAI NIJIKIZAMA

Vice President Emmerson Mnangagwa was dismissed and humiliated on Monday after clashing with Mugabe’s wife Grace, who is now in prime position to succeed her husband.

The removal of Mnangagwa, who has powerful military connections, has laid bare the rivalries inside Zimbabwe’s political establishment as Mugabe, 93, shows increasing signs of old age.

“The situation reflects an enormous amount of unpredictability,” said Piers Pigou of the International Crisis Group. “We are moving into unchartered territories.”

“It appears Mugabe is prepared to surgically remove significant sections of the party’s historical support base… to try to consolidate his own position and the future leadership.”

Mnangagwa, 75, quickly fled into exile, but he vowed to return and launched a direct challenge to Mugabe by calling for members of the ruling Zanu-PF party to desert the president.

Mugabe reacted by expelling him from the party, which will hold its annual congress next month when Grace – a hugely divisive figure – could be appointed as one of the country’s two vice presidents.

“The ball is in Mnagnagwa’s court, but what are you going to do outside the party?” Pigou said.

“The biggest question is what kind of elevation do we see for Grace Mugabe.”

The potential leadership role for Grace, who has many opponents within the party and government, could even threaten the future of Zanu-PF.

“This is the beginning of the end of Zanu-PF, it is a total destruction of Mugabe’s legacy,” independent analyst Dewa Mavhinga told AFP.

“If Grace ascends to the top, she will fall because she has created so many enemies. She has been reckless. Zanu could be destroyed from within.”

Mnangagwa’s next move is uncertain, but any path back to high office seems beset with obstacles.

“It will be very difficult for him reinvent himself as a democrat because he is cut from the same cloth as Mugabe,” said Mavhinga.

Mnangagwa was instrumental in much past election violence, including the 2008 presidential runoff when opposition leader Morgan Tsvangirai pulled out due to a wave of killings and beatings.

And as security minister in the 1980s, Mnangagwa played a leading role in the Gukurahundi massacres that claimed the lives of around 20 000 perceived dissidents in the southwest of the country.

Mnangagwa issued a defiant statement on Wednesday, telling Mugabe that ZANU-PF was “not personal property for you and your wife to do as you please”.

The next flashpoint could be next week when Mnangagwa supporters plan to stage protests against Mugabe in Harare.

But some experts believe the turmoil may actually allow Mugabe — the world’s oldest national leader – to strengthen the extraordinary hold on power he has maintained since 1980.

While the country’s economy collapsed long ago, Mugabe’s presence only seems to grow. On Thursday, Harare Airport was renamed Robert Gabriel Mugabe International Airport in his honour.

The president’s birthday was also recently declared a public holiday, while a $1 billion Robert Mugabe university is being planned.

“He has fired senior party officials for decades and has continued in a ‘life-as-usual’ mode,” Eldred Masunungure, a political scientist from the University of Zimbabwe, told AFP.

“What should be worrisome this time is the protracted uncertainty.”

The Singapore-based BMI risk consultancy noted that the risk of an immediate military coup after Mnangagwa’s ousting had receded and predicted another victory for Mugabe in the 2018 elections.