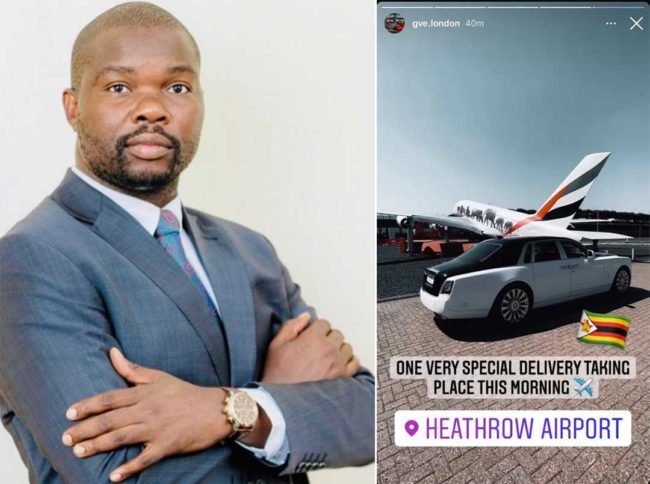 Revelations that an unnamed Zimbabwean government minister is importing a luxurious Rolls Royce Phantom worth
£330 000 from the United Kingdom have sparked outrage from local and British activists.

GVE London announced on Friday that it had shipped the car to Harare via a short video that has since gone viral on social media.

The identity of the minister remained a mystery yesterday, but some online media outlets named a youthful deputy minister as the owner of the car.

“We continue to demand radical transparency and a far-reaching international audit of the offshore networks that enable looting by Zimbabwean ministers and political elites,” Mahere said.

“They launder the loot by buying super cars while the masses starve. Corruption is killing us.

“This must be the most sickening advert possible from (GVE London),” Hoey, a keen follower of the situation in Zimbabwe, tweeted yesterday.

“Millions hungry, hospitals empty of medicines, abuse of human rights daily in Zimbabwe, yet a Zanu PF minister buying this is treated like a hero by the company.”

Duncan Hames, director of Transparency International in the UK, also called for an inquiry into the matter.

“If a foreign government minister spends at least £300 000 on a super car, that might warrant a Suspicious Activity Report to the National Crime Agency first,” Hames said.

“It sounds like this car sales business might need to register with Her Majesty’s Revenue and Customs for anti-money laundering supervision.

“They’ve been accepting Bitcoin since April.”

“It is an issue of concern when the majority of the citizens are wallowing in poverty and a few elites are enjoying lifestyles to the extent of affording to buy such a luxurious car,” Maketo said.

“That is why there have been growing calls for asset disclosure among public officials.

“Given the salaries that ministers earn, it is difficult for an ordinary person to understand how that same minister can afford to buy a Rolls Royce vehicle.

“Lifestyles of ministers are open to public scrutiny because they are entrusted with the duty of improving the livelihoods of the poor.

“Citizens will never accept a situation where a minister accumulates riches at their expense.”

Maketo said even if the minister had acquired his riches in a transparent manner, it was untimely to buy the luxurious car when the people who voted him into office were struggling to put food on the table.

“Buying luxury cars will only widen the gap between the poor and the elite,” he said.

The World Bank last month said at least 1.3 million Zimbabweans  fell into  extreme poverty last year bringing the number of Zimbabweans living on the margins to 7,9 million or 49% of the country’s population.

Nick Mangagwana, the government spokesperson, appeared to be defending the purchase of the sleek car tweeting:  “I see some have made it their pastime to hate the rich among us.

“I think some hate the rich because their success is an indictment on their own failures.

“Success does not transfer to us just because we don’t wish it on anyone else. Let’s not be a country that haunts its well-offs.”