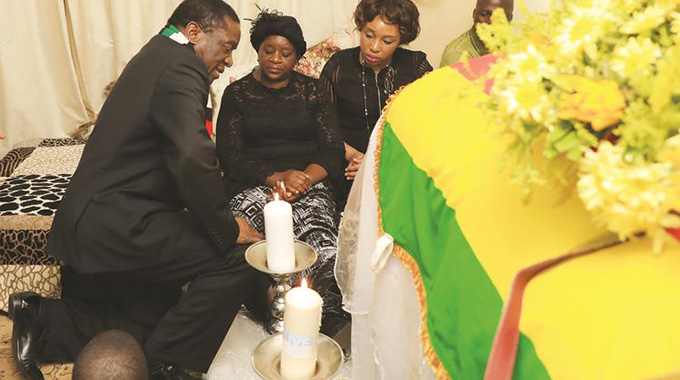 National hero Major-General Trust Mugoba was a distinguished fighter who remained unwavering to the revolution throughout his life, President Mnangagwa has said.

The Head of State and Government said this at Maj-Gen Mugoba’s Greendale, Harare, residence yesterday, where he had gone to convey his condolences ahead of burial today at the National Heroes Acre.

Thousands of people are expected to throng the national shrine for the burial, where President Mnangagwa is expected to deliver the keynote address.

Maj-Gen Mugoba, whose Chimurenga name was Joseph Zulu, died at the Avenues Clinic last Friday after a short illness.

Speaking at the Mugoba residence, President Mnangagwa said Maj-Gen Mugoba executed his military duties with precision and beyond reproach, resulting in his secondment to the African Union (AU) where he was Chief of Staff in the Office of the Commission on Peace and Security in Africa.

“He was a distinguished fighter,” he said.

“When we met as the Zanu-PF Politburo to consider his hero status, everyone was impressed by reports of his illustrious career. The decision was unanimous, not even a single dissent was heard during our meeting.”

President Mnangagwa said he received the message of the passing on of Maj-Gen Mugoba last Friday from South Africa at around 9am after he had received news on the death of former President Mugabe early that morning from Director General in the President’s Office, Mr Isaac Moyo.

“I had to approach my colleague (South African president) Cyril Ramaphosa that I had received sad news and will not be able to continue with the World Economic Forum meeting that was ongoing,” he said. “I was not aware that Maj Gen Mugoba had come to Harare, but I had last met him in Ethiopia where he accompanied me to the airport.

“He was quite fit when I last met him, but he complained that he sometimes fell short of breath and said probably it was because of the high altitude of Ethiopia where he was residing.”

One of the incidents occurred soon after independence where Maj Gen Mugoba led soldiers to repel assaults by the Mozambique National Resistance on Zimbabwe’s fuel pipeline running from Beira to Mutare.

Another incident was the Democratic Republic of Congo campaign where that country’s former leader, Laurent Kabila, called for help from Zimbabwe and other SADC countries.

“We held several meetings with service chiefs to organise the DRC campaign and Maj Gen Mugoba was one of them, but he was quite young, but fearless,” said President Mnangagwa.

“Mourners will be picked up at the usual pick up points,” he said. “40 buses were allocated to Harare province, 10 for Bulawayo, one each for the remaining provinces and two for the family. The buses will start ferrying people at 6am at designated bus stops.’’

Hundreds of people thronged Inkomo Barracks yesterday where the Zimbabwe Defence Forces held a Military Parade in honour of the late general.

Gen Sibanda led the laying of wreaths and later delivered a speech where he chronicled the life of the National Hero from birth, his educational background, contributions during and after the liberation struggle, and courage which saw him being nominated for regional posts, putting the name of the country on the continental map.

In a statement read by General Sibanda at the funeral parade, the AU Commission said while Zimbabwe had lost a hero, and an outstanding military leader, Africa had gained a legend.

Newer Post
My ties with Zimbabwe have been cut: Henry Olonga on how Robert Mugabe changed his life
Older Post
Matemadanda to attend Mugabe funeral