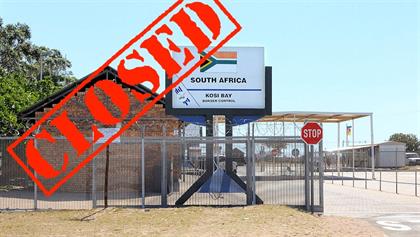 SOUTH AFRICA says it will make use of drones and other technologies to tighten security at its borders to stop Zimbabweans and other foreigners from illegally crossing into the country.

The country’s Home Affairs minister Aaron Motsoaledi on Monday told broadcaster eNCA that the country was in the process of appointing commissioners to strengthen the Border Management Authority in dealing with illegal immigration.

Motsoaledi, however, warned that the measures to curb illegal immigration could result in loss of lives since no system was waterproof.

Zimbabwe’s borders are still closed for cross-border travel to curb the spread of COVID-19, which is forcing people who survive on cross-border trading to cross through illegal points of entry into South Africa.

Motsoaledi cited unemployment and hunger as the major push factors for illegal immigration, particularly for Zimbabweans.

“We are dealing here with social and economic systems in neighbouring countries,” Motsoaledi said.

“The borders during the apartheid were electric fence, the army, and all that, which we removed because we thought we are a democracy. Now we realise we made a terrible mistake by removing those and replacing them with nothing.

“South Africa is shortly setting up the Border Management Authority, whose mandate will be to secure the borders and stem the tide of illegal border crossings.”

Zimbabwe’s Home Affairs minister Kazembe Kazembe said he was in a meeting when he was contacted for comment.

Motsoaledi said South Africa had to tighten security because the “desperate” Zimbabweans had improvised other tactics to defy the current security measures to eke out a living in the neighbouring country.

“People are illegally crossing through the border and the army is deployed where they cross over. Security is tight, but people still cross because this is out of desperation from what is happening in neighbouring countries, especially Zimbabwe,” he said.

“They go down the ladder to then cross the river but the army is waiting for them. We need a commissioner of the Border Management Authority, whose job is to deal with borders and we are already in the process of appointing two deputy commissioners.”

Motsoaledi, however, said ending illegal immigration depended on the neighbouring countries’ willingness to fix their economies and create jobs for their citizens.

South Africa, the most economically developed country in the southern African region, attracts thousands of migrants annually who seek jobs at farms and factories, but some get into the country through illegal cross points.

South Africa is home to more than three million Zimbabweans, a majority of them undocumented immigrants, who fled the country in search of jobs following the collapse of the economy two decades ago.