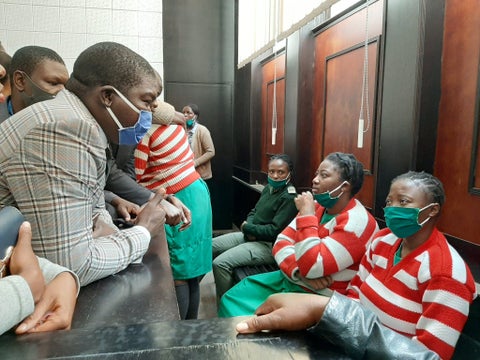 MDC Alliance MP Joanah Mamombe (Harare West) and party activists Cecilia Chimbiri, Netsai Marova and Obey Sithole were yesterday given May 13 as their trial date in a case in which they are being accused of violating COVID-19 regulations.

The opposition activists protested during the lockdown period over lack of government assistance to vulnerable groups.

Their arrests came after Mamombe, Chimbiri and Marova were allegedly abducted by suspected State security agents before they were released later after a public outcry by citizens and the international community days later.

The trio were allegedly later dumped in rural Bindura by their captors.

They were also charged for allegedly comunicating falsehoods. The State argues that the trio faked their abduction.

Sithole, who is the MDC Alliance youth chairperson, was yesterday arrested at the Harare Magistrates Court soon after coming out of court over unknown allegations.

Meanwhile, Zimbabweans have intensified online #ZimbabweLivesMatter campaign in a bid to ramp up pressure to have  Mamombe and her collegues freed.

Mamombe and Chimbiri have been incarcerated at Chikurubi Maximum Security Prison for the past 50 days.

They were accused of violating COVID-19 regulations and denied bail.

Last week, Mamombe fell ill and was taken to hospital, but Zimbabwe Prisons and Correctional Services officers forcibly removed her from her hospital bed and returned her to prison despite her frail state.

Faiza Mohamed, who heads women’s rights group Equality Now in Africa said:  “The government must stop malicious prosecution, free them from police custody and launch an independent investigation into the brutal attack committed against these women.”

In a tweet, the United Kingdom embassy in Zimbabwe said: “Following the case of Joanah Mamombe closely. Very important that she gets the medical attention she needs. All prisoners have the right to equal and fair treatment under the law.”

ZimRights national executive director Dzikamai Bere said:  “It is a violation to a right to healthcare and it is evident that the State is not worried about bringing Joanah to justice, but rather the State is bent on punishing her for her activism. It is a violation to the rights of persons in detention, people are put into pre-trial detention not to punish them for an offence they have not yet been tried for, but are put in pre-trial detention to make them available for court, for justice.”

Heal Zimbabwe Trust programmes manager Knowledge Mandikwaza said: “Free activism is a basic and free right for everyone and what is happening to Joanah shows continuous targeted victimisation not looking at the merits of her case, but all prisoners should be treated with dignity”.