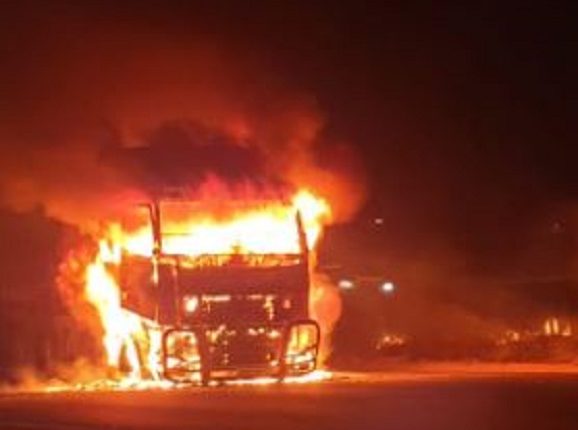 BY NHAU MANGIRAZI.
A truck driver was burnt beyond recognition by a ball of fire emanating from a sulfur spillage at Wafa Wafa, Mashonaland West on Saturday.

According to the Environment Management Agency (EMA), the incident occurred along the Harare –Chirundu highway around 6am.

”The truck was carrying 30 tons of sulfur and all the sulfur spilled into the environment. The accident occurred along a commonly known hotspot known as ‘Wafa-Wafa’ and information gathered indicate that the driver might have failed to negotiate the curve which resulted in the truck overturning and driver burnt beyond recognition,” Nharisa said.

“The fire was finally extinguished by the Chinhoyi Fire Brigade around 1930hrs.”

Primary inspections to quantify and quantify the extent of environmental damage are in progress, Nhariswa added.

He said EMA is in contact with the transporter, Keysim, for commencement of the spillage clean up exercise.

Section 73 of the Environmental Management Act prohibits the discharge of hazardous substances into the environment, and places the responsibility of rehabilitating and restoring the affected area on the polluter.

“The motoring public should exercise extreme caution when approaching such accident scenes as the surface may be slippery and visibility obscured. Take heed of the instructions given by the law enforcement agencies, and prioritize safety above anything else, ” he said.