Why are you allowing Chief Justice Luke Malaba to be made a fool of?

Source: Why are you allowing Chief Justice Luke Malaba to be made a fool of? | The Standard 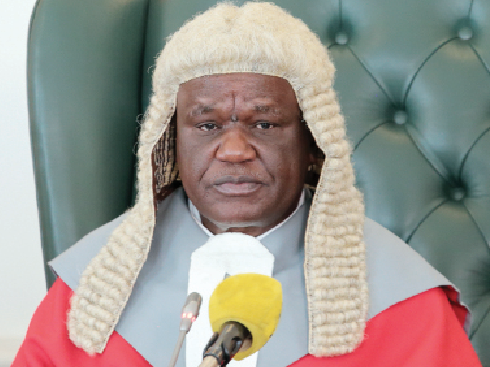 When the present government successfully carried out its coup against the tyrant Robert Mugabe, I applied for a temporary position in public relations. I had lined up a group of professors, we had our own money; our intention was to bring the Zimbabwe government up to speed in its public relations.

The situation surrounding the learned Chief Judge (US English) Luke Malaba (pictured right) proves my point. It is a total disaster. At this point, I must point out that this newspaper, or its editors, are not responsible if the reader falls off his (her) chair.

I will start with the juiciest. A needle-breasted woman of the Bantu race, Sister Erica Ndebele, is summoned before his eminence. After a sterling performance at law school, and combining her immaculate beauty with a sharp brain, it was obvious that Erica was destined for bigger things.

When I visited the Zimbabwe Court Chambers near Parliament, I held my step as I saw a beauty queen swaying herself deliberately in the chambers in the nature of the Bantu natives.

“What are you looking at?” my escort asked. I merely stood in awe and in typical US fashion asked a stupid question.

“Is there a beauty pageant here?” I asked.

Erica, appointed by former president Mugabe as Justice of the High Court in July 2013, soon rose to become president of the Labour Court.

Moved to the general sessions of the High Court, she was soon challenged to master all her courage. In September 2020, she released an MDC operative, Brother Job Sikhala, on bail. Sikhala was accused of saying bad words, and with typical political hyperbole, the police objected to his reference to a change of government.

There was nothing unusual about her decision. Prisca Mupfumira, accused of embezzlement of U$99 million, was out of jail on bond. Former minister Ignatius Chombo, accused of serious abuses while in office, a tenth of which, if true, could sink the Titanic, is out on bond. the list goes on.

There are two issues here. Please, readers, I beg you, listen carefully. If an older man among the Bantu goes after a sharp- breasted younger woman, with apparent intent at victimisation, what am I supposed to think has happened between the two? It is something to think about.

Here are the arguments.

She was hurriedly brought before a tribunal, accused of the most egregious misdemeanours. First, she had an outstanding case load of 28 cases with a time lag of over 90 days. Please hold your breath.

That was totally untrue.

My mother of the Rain Bird, did Chief Judge Malaba not do his homework before laying such egregious charges? I will here and now charge Malaba’s colleagues of wishing him harm.

We have evidence that the Judge President made an inquiry and found this number to be in error. The registrar of the court did not pass this knowledge to the Chief Judge.

These Philistines say they have friends.

But there is more. Sometime around June 20, 2019, the Chief Judge expressed anger at outstanding judgements going on for years. He should have been applauded for this. He gave judges 17 months to bring all outstanding matters to a speedy conclusion, from June 30, 2019.

Now wait for this. In a request for the suspension of Judge Erica, Malaba accused her of a 90-day delay.

Please, pray for the patience of Job.

Further, this 90-day delay, according to our sources, was also incorrect. She was granted sick leave for a period and could not have been held responsible for judgements while she was ill.

Again, I accuse his subordinates of allowing this to pass. I am only the littlest saint in the House of the Lord, but whatever I do or write in advising the Bishop, is read by mightier saints than I and corrections in wording is often done.

Chief Judge Malaba has a “bunch of interns” (US English) and surrogates whose only job is to do his bidding. I do not blame the Chief Judge for these errors. His subordinates, being Philistines, are not known for loyalty and probity.

There is a Negro idiom that says: “If it looks bad, it is bad.”

Now the heart of the matter is Judge Erica was suspended without pay on spurious charges. Hear you men of Jerusalem and even those in Judea.

Docking her pay, as they say in legalese, was outside the law.

If we cannot trust the Chief Judge to act within the law, who on earth shall we trust?

I will leave our readers with a juicy morsel. The first two readers to decipher what is going on in my mind, as Joseph the Israelite did before Pharaoh, I will part with two chickens. In my opinion, this matter has left the domain of Zanu PF revenge on the Sikhala bail judgement.

Kana murume mukuru osimbirira nyaya dzekamusikana, ka Miss Erica, it does not look good to me.

I return to the motif of my story. Why are his friends and subordinates allowing him to be made a fool off?

On April 8, the Zimbabwean told a “sob story” of 64-year-old Herosi Moyo. Herosi says that sometime circa December 18, 2018, he was cycling along the Matopos road when a car in which the Chief Judge was riding, crushed his bicycle, causing some damage to his body.

Herosi says he is missing his bike, the Chief Judge or his surrogates have not cared to look at his hospital bill of U$840. The case has not been resolved and it appears that the police have no interest.

There is also an issue whether the Chief Judge was driving the car or whether it is true that Luke Mangena was the driver.

There is something terribly wrong in the way the government of Zimbabwe conducts its business. It reminds me of the wise advice from my school master, J M D Manyika: “The trouble with you my boy, Ken, is that you jump before you look.”

This cannot be allowed to go on indefinitely, making a fool out of our Chief Judge. The root cause seems to me to be either that the subordinates are of a malicious disposition and do not bring to his attention these stupidities, or he has created a hostile atmosphere in his office whereby his interns look the other way.