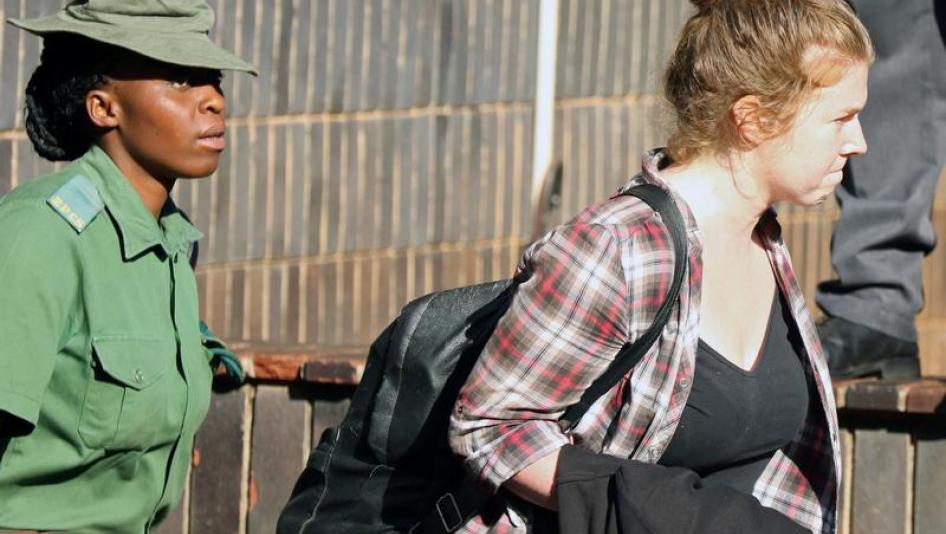 On November 2, 2017, police in Harare, the capital, arrested and detained an American journalist, Martha O’Donovan, on charges of abuse of social media for allegedly insulting President Robert Mugabe on Twitter and of “using” social media to overthrow the government. The arrest appears linked to the mandate to “control social media” under the newly established Ministry of Cyber Security, Threat Detection, and Mitigation. The High Court granted O’Donovan bail on November 9, following an application filed by the Zimbabwe Lawyers for Human Rights.

“The charges against Martha O’Donovan appear to be a baseless and arbitrary action to control social media,’” said Dewa Mavhinga, Southern Africa director at Human Rights Watch. “This is the Zimbabwe government’s latest expansion of its dangerous campaign against media freedom.”

During 2016, police throughout Zimbabwe beat and arbitrarily detained 23 journalists. The journalists were all released without charge. There have been no known investigations or arrests in these cases, which not only infringe on the rights to be free from mistreatment and arbitrary arrest, but also undermine media freedom in the country. The head of the police, Commissioner General Augustine Chihuri, has failed to publicly condemn this misconduct by the police under his command.

Police harassment and mistreatment of journalists has been rising since 2016, the three organizations said. On September 29, police seriously beat and injured Mugove Tafirenyika and Brighton Goko, journalists for the privately owned newspaper The Daily News, as they covered protests in Harare’s central business district. The police neither investigated the journalists’ complaint nor arrested anyone.

On July 27, a police team from Harare Central Police station arrested three journalists from the privately owned daily NewsDay for allegedly filming and taking photos as the police harassed people in Harare. The journalists, Obey Manayati, Shepherd Tozvireva, and Abigail Matsikidze, were beaten, along with their driver, Raphael Phiri. The journalists filed a complaint that identified police officers involved, but the police did not investigate.

On March 3, police arrested NewsDay’s editor, Wisdom Mudzungairi. and a reporter, Richard Chidza, and charged them with insulting or undermining the president following publication of a story on Mugabe’s health.

“Zimbabwe should immediately halt police harassment of journalists and uphold media freedoms guaranteed in the constitution,” said Blessing Gorejena, executive director at Zimbabwe Human Rights NGO Forum. “The government should urgently establish an independent mechanism to investigate and remedy abuses by the police.”

Zimbabwe is party to the African Charter on Human and Peoples’ Rights and the International Covenant on Civil and Political Rights, both of which guarantee the right to freedom of expression. The United Nations Human Rights Committee, which monitors state compliance with the covenant, has stated that “the mere fact that forms of expression are considered to be insulting to a public figure is not sufficient to justify the imposition of penalties.”

The right to free expression, encompassing freedom of speech and the press, is constitutionally protected in Zimbabwe. But Zimbabwe has several laws in place that limit Zimbabweans’ rights to freedom of expression.

The government should amend or repeal laws that infringe on the right to freedom of expression and media freedom, including the Access to Information and Protection of Privacy Act (AIPPA), used to license and regulate the media; the Criminal Law (Codification and Reform) Act, used to criminalize media work and citizens’ right to free expression, including prohibitions on insulting the president; and the Broadcasting Services Act (BSA), which hinders free establishment of broadcasting stations. Under international law, restrictions on freedom of expression for national security or public order are only permissible if strictly construed, and necessary and proportionate to address a legitimate threat.

“Instead of media repression and muzzling cyberspace, the new Cyber Security Ministry should facilitate the enjoyment of free expression, right to access to information, and other media freedoms,” said Ernest Mudzengi, executive director at Media Centre. “Journalists who conduct independent reporting or dare to express critical views should not be punished for performing this sacred public duty.”