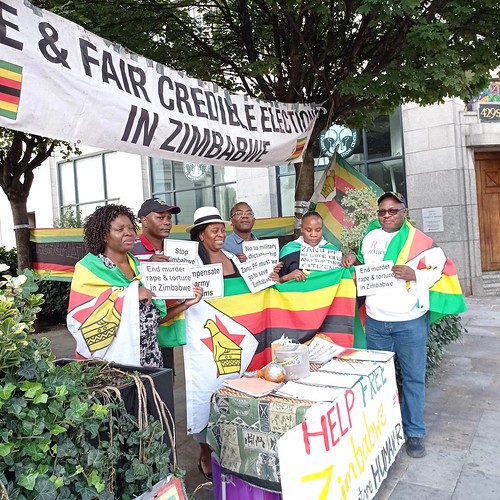 The Pan-African research network Afrobarometer says the majority of Zimbabweans are in favour of a coalition government as a way of resolving the country’s political and economic problems.

Political analyst Ernest Mudzengi said that, by opting for a coalition government, citizens had indicated they had lost hope for reforms under a Zanu PF government. ‘Calling for a coalition government is a sign of desperation. They are speaking from history where they saw a change during the unity (coalition) between the now late MDC leader Morgan Tsvangirai and Robert Mugabe’, Mudzengi said.

But Zanu PF secretary for administration Obert Mpofu said: ‘Our party does not recognise the so-called opposition party led by Nelson Chamisa’. He said it was only prepared to work with the participants in the government-created Political Actors’ Dialogue (POLAD).

Chamisa’s spokesperson Nkululeko Sibanda said Chamisa wanted a unified nation just like his supporters do. ‘But there is a difference between a genuine coalition and a bastardised one’, he said, accusing POLAD of being a bunch of useless people pursuing material benefits (see: https://www.newsday.co.zw/2021/09/fresh-push-for-coalition-govt/),

In a statement ahead of the MDC’s 22nd anniversary today, Chamisa said the party would survive despite Zanu PF’s determined efforts to destroy it. ‘The oppressor has used surrogates masquerading as opposition to impersonate us, usurp the people’s assets and to expel people’s lawfully-elected political representatives from elected bodies. They have even diverted public funds that we rightfully earned based on our performance in the 2018 elections. This money is dished out to their preferred opposition. The idea is to suffocate us politically and financially and drive us into extinction.’ (See: https://www.newzimbabwe.com/state-machinery-wont-destroy-us-chamisa-speaking-ahead-of-mdcs-22nd-anniversary/.)

The Herald tells us every day that things are getting better and better in Zimbabwe. It is always a cheerful read: the economy is about to boom and we are well on course to be a middle-income country by 2030 thanks to the wisdom of our visionary leader Comrade Mnangagwa.

It takes a cynical former finance minister like Tendai Biti to spoil the party. He says the Zanu PF regime is ideologically bankrupt and cannot transform the lives of suffering citizens. He accuses Mnangagwa of advancing a ‘dangerously unpatriotic agenda’ through rewarding the Russians and Chinese with secret mining deals (see: https://www.zimbabwesituation.com/news/biti-exposes-mnangagwas-secret-deals-with-china-russia/).

Lovemore Moyo, a former speaker of parliament and now leader of the opposition United Movement for Devolution, says Zanu PF is unwilling to Implement devolution of power for fear it would deny its officials the opportunity to loot public resources (see: https://www.newsday.co.zw/2021/09/govt-fears-devolution-may-plug-looting-holes/).

Newer Post
Local goods too expensive for civil servants: Minister
Older Post
Stories from the field: How vaccines can help to prevent antibiotic resistance – Zimbabwe’s response to drug-resistant outbreaks of typhoid and cholera