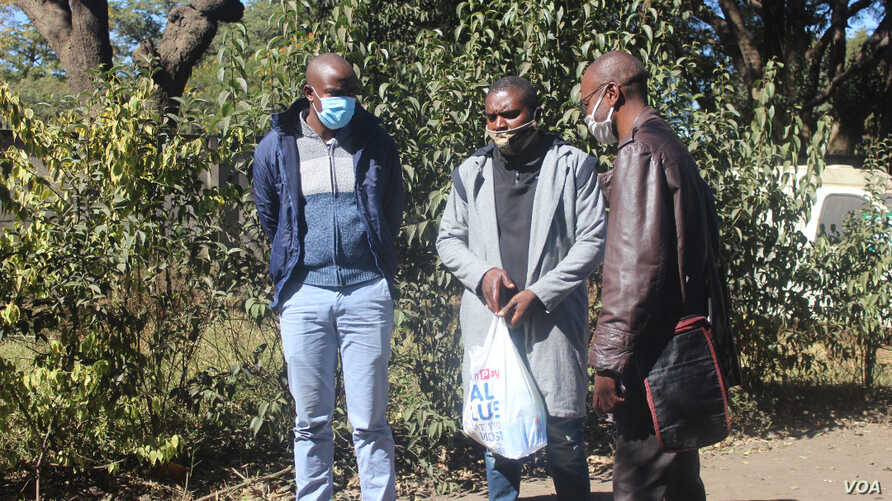 Journalists Samuel Takawira and Frank Chikowore stand with a police detective outside a court in Harare, Zimbabwe, May 23, 2020. (Columbus Mavhunga/VOA)

TWO Zimbabwean journalists will spend the weekend in jail pending the
determination of their application for release from prison custody on
bail.

The two journalists Frank Chikowore, a freelance journalist and Samuel
Takawira, who works for 263Chat appeared before Magistrate Manase
Masiiwa at Mbare Magistrates Court in Harare on Saturday 23 May 2020
after they were arrested on Friday 22 May 2020 by some Zimbabwe
Republic Police members at Parktown Hospital in Waterfalls suburb in
Harare while allegedly filming and interviewing some victims of
abduction and torture currently detained at the medical facility and
charged with contravening section 11(b) of Statutory Instrument 83 of
2020, Public Health (COVID-19 Prevention, Containment and Treatment)
(National Lockdown) Order, 2020.

Prosecutors alleged that Chikowore and Takawira, who were represented
by Paidamoyo Saurombe and Tonderai Bhatasara of Zimbabwe Lawyers for
Human Rights failed or refused without sufficient cause to comply with
any request made or direction given by a police officer when they
allegedly sneaked into the High Dependency Unit at Parktown Hospital
to interview Harare West legislator Joanna Mamombe and MDC Alliance
party youth leaders Cecelia Chimbiri and Netsai Marova, who are
currently hospitalised at the medical facility after they were
abducted and disappeared and tortured by some yet to be identified
people.

Prosecutors charged that Chikowore and Takawira were arrested by
Detective Constable Collin Makore, who was reportedly providing
security at the medical facility for allegedly failing to observe the
social distancing rule between themselves as well as not maintaining
social distancing with the detained victims of abduction and torture.

In their bail application, Saurombe and Bhatasara argued that
Chikowore and Takawira must be released from custody on bail while
prosecutors opposed their freedom bid.

This prompted Magistrate Musiiwa to postpone the matter to Tuesday 26
May 2020, where he will hand down his ruling on the journalists’ bail
application.

Newer Post
On 7th Anniversary of the constitution do not amend but implement and comply
Older Post
In Zimbabwe, Vital Medicines in Short Supply as Coronavirus Stalls Imports