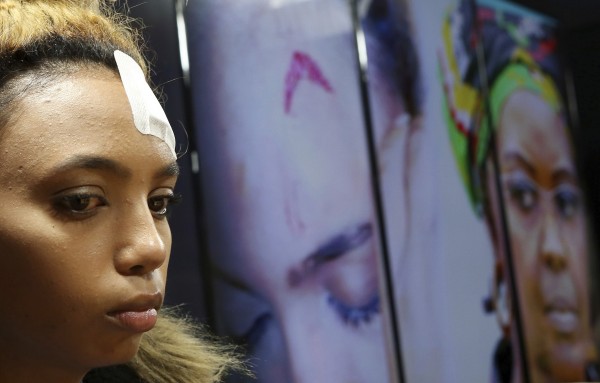 File: Model Gabriella Engels filed an assault charge against former Zimbabwean First Lady Grace Mugabe, who was later granted diplomatic immunity. Photo: AFP / Phill Magakoe
PRETORIA – AfriForum’s application against the decision by the South African government to grant diplomatic immunity to former first lady of Zimbabwe Grace Mugabe following an alleged physical assault on Johannesburg model Gabriella Engels will be heard in the High Court in Pretoria this week, the lobby group said on Tuesday.“This court application is the first important step in a process to have Mugabe prosecuted for her alleged assault of Gabriella Engels, a young Johannesburg model, in August 2017. High drama reigned last year when it became known that Engels was allegedly assaulted by Mugabe with an electric cord because [Grace Mugabe] was unhappy with the escapades of her two sons in a luxury hotel in Sandton,” AfriForum legal representative Willie Spies said.“At the time, the South African government decided, in a very controversial manner, to silently grant diplomatic immunity to Grace Mugabe, thus giving her the opportunity to return to Zimbabwe from South Africa and therefore evade prosecution in South Africa. Because of her being granted diplomatic immunity, the National Prosecuting Authority (NPA) could not further investigate the charges against Mugabe of assault with the intention to cause grievous bodily harm and AfriForum therefore launched a court application to have the controversial grant set aside.”

Spies said various other institutions have since brought similar applications with the High Court in Pretoria and entered the proceedings as friends of the court.

Spies said all the applications around this case will be heard simultaneously.

The matter is set down for Thursday and Friday.

“Should AfriForum be successful in having this diplomatic immunity to Mugabe set aside, it will pave the way for the NPA to take steps to ultimately prosecute Mugabe. AfriForum indicated earlier that its private prosecuting unit, under the leadership of Advocate Gerrie Nel, stands ready to institute private prosecution should the NPA decide not to prosecute Mugabe,” Spies added.