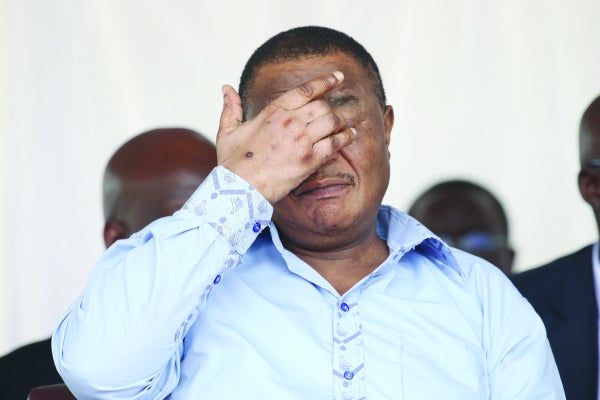 AILING Vice-President Constantino Chiwenga has been flown to China for expert medical attention after his health deteriorated further although government insists he is on a path to recovery.

In a statement released yesterday, presidential spokesperson George Charamba said Chiwenga was on his way to recover in China under the watchful eyes of experts from China, Zimbabwe, South Africa and India.

“The Office of the President and Cabinet wishes to inform the nation that the Vice-President this week left for the People’s Republic of China where he is set to undergo further medical tests,” Charamba wrote.

The purpose of his transfer to China, according to insiders, is for him to meet new doctors who believe they might get a breakthrough in seeking a medical solution to an undisclosed illness that has been afflicting the decorated retired army general, who led the coup against former President Robert Mugabe.

“He is not in good shape, he is barely recognisable and there was a feeling that advanced medical equipment in China could be useful and save his life,” an insider said.

In his statement, Charamba, however, said a high-level decision was made to transfer Chiwenga to build up on his recovery.

“His relocation to China, which builds on the satisfactory recovery progress he has been making, follows weekend discussions at the highest level between governments of Zimbabwe and China, at which decision was taken to allow Chinese medical experts to join their expert counter parts from Zimbabwe, South Africa and India in attending to the Vice-President,” he said.

Chiwenga was viewed as Mnangagwa’s heir apparent and kingmaker after engineering a coup to remove Mugabe without any international or regional backlash.

Zanu PF had already started to see the emergence of factions with mainly the military component in the party backing Chiwenga to take over the reins of power before 2023, although the party has denied such notions.

Sources said Chiwenga’s illness has allowed President Emmerson Mnangagwa to reassign top military personal who were influential during the November 2017 coup and posting them to diplomatic missions.

At party level, Mnangagwa elbowed Retired General Engelbert Rugeje from the influential position of Zanu PF political commissar, although he remains a politburo member without portfolio.

Chiwenga has not appeared in public over the past two months as he nurses his ailing body.

He has been in an out of hospitals in South Africa, India and Zimbabwe receiving medical treatment after collapsing a number of times while at work.