All set for Gweru youth interface 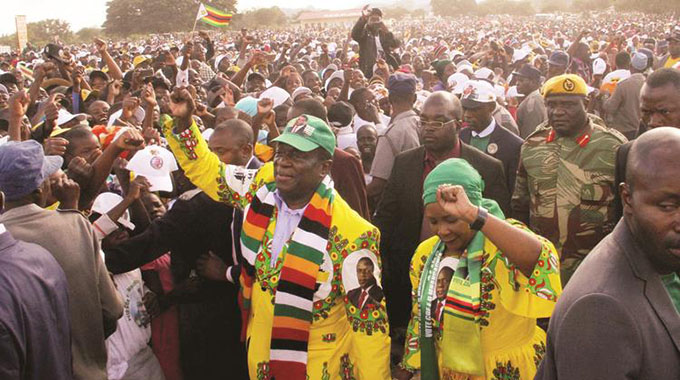 Gweru was a hive of activity yesterday with youths and provincial party leaders working to ensure a flawless event.

The Youth League yesterday expressed confidence that the province would host over 30 000 youths.

The Youth League Convention will be held at an open ground behind Mkoba Teachers’ College along Hamutyinei Road.

Hundreds of the youths were also registering to participate in the #EDhasMyVote 5km fun run set for Mkoba Stadium from 6am to 7am today.

The brainchild of the Zanu-PF Youth League, the convention would see youths from the country’s 10 provinces articulating their social, economic and social issues to the President Mnangagwa who is expected to respond.

The Youth League has also invited Government departments, parastatals, universities and the corporate world to exhibit at the convention.

President Mnangagwa has indicated that his administration would prioritise economic resuscitation to create employment and empowerment opportunities for the youths.

In an interview, Midlands Provincial Affairs Minister Cde Owen Ncube said the preparations were at an advanced stage and are going smoothly.

“As a province we are very excited about the President’s visit and we cannot wait to have the President here. For now the preparations are going smoothly and we are at an advanced stage,” he said.

Cde Ncube urged party supporters across the province to come out in numbers and meet the President ahead of the harmonised elections.

He also urged party supporters to remain united and focused ahead of the harmonised elections slated for July 30.

“It is crucial that we remain focused and united especially at a time like this where we are approaching elections. If there is unity, then we are guaranteed of a win,” he said.

Cde Ncube said the province is geared for sweeping victory for the ruling party.

“As the province, we have garnered enough support for our President and we are confident that we will romp to victory,” he said.

Zanu-PF Midlands provincial youth chairperson Cde Edmore Samambwa said the provincial and youth leadership met at the venue for the last time before the convention where they were all satisfied with the preparations.

“We are well on course to having a fruitful convention with President Mnangagwa. The stage has been set and we ready to go. Youths even had time to hold a procession in town and in suburbs like Mtapa, Mkoba, Senga to mobilise many youths to attend the convention,” he said.

Meanwhile, Zanu-PF National Youth Secretary for Education Cde Wellington Tagarira, who is the director of the #EDhasMyVote 5km fun run set for Mkoba Stadium, said scores had registered to participate at the event.

He said registration was still in progress.

“The aim of the fun race is to gunner support for our President and all the youths from all over the country are encouraged to come out in their numbers and participate as there will be various prizes to be won.

“Even those from the opposition parties are encouraged to participate because Cde Mnangagwa is not only the President for Zanu-PF youths, but he is everyone’s President,” said Cde Tagarira.

Cde Tagarira said the fun race will be divided into four categories – the Under-19, 30, 40 age group and wheelchair category.