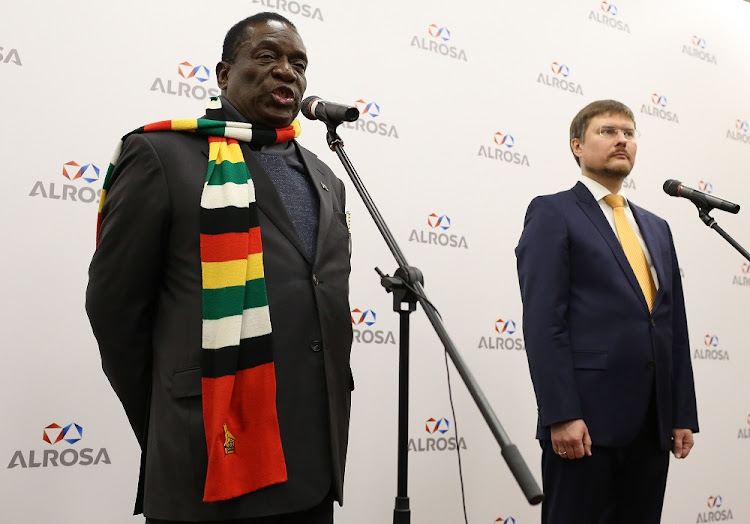 Harare – Russian diamond company Alrosa on Tuesday signed a deal to explore and mine diamonds in Zimbabwe, as the southern African nation seeks to leverage its mineral resources to boost the country’s ailing economy.

Zimbabwe has large diamond reserves but mining of the precious stones has been chaotic with shady dealings rampant and policy flip-flops by the government a turn-off for investors.

In 2016, Zimbabwe’s government dismissed six companies that were mining in the diamond-rich Marange area, accusing the firms of opaque dealings, with then president Robert Mugabe controversially suggested that as much as $15bn could have been siphoned from the sector.

After jettisoning all companies in 2016 the state single-handedly took over diamond mining operations, but in 2018  the broke government then decided to allow new investors, but only if they partnered with the state.

In an interview with journalists after the signing ceremony, Alrosa CEO Sergey Ivanov said his company will invest an initial $12m in the venture.

“We are hoping that exploration will start in September. We see a lot of potential and we will invest more in the coming years depending on the outcome of the exploration,” he said.

Speaking after the signing of the deal between Alrosa and the Zimbabwe Consolidated Diamond Company (ZCDC), mines and mining development minister Winston Chitando said there was a lot of scope for investment.

“This is part of our vision to produce 10-million carats annually and to earn $1bn every year from diamonds,” he said.

Zimbabwean President Emmerson Mnangagwa, who witnessed signing of the joint venture, said the deal had come to fruition owing to his country’s excellent relations with Russia.

In January Mnangagwa travelled to Russia to seek funding for mining investments in the country.

Russian investors have also committed to invest $3bn for platinum production in Zimbabwe under a joint venture with government but the deal is yet to take shape — with concerns over shareholding demands by the government holding back the deal.

In 2018 Zimbabwe scrapped its controversial indigenisation policy that forced all foreign investors to cede 51% shareholding in all investments but reserved platinum and diamond as the only sectors where investors are obliged to partner with government.