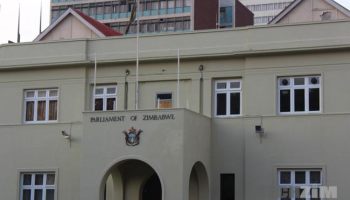 The Senate Has Adjourned to 15th September

First An Apology : In the last Bill Watch we stated that Hon Masango Matambanadzo who passed away recently

The Senate met on Tuesday 4th August, the date to which it had adjourned from its most recent previous sitting on the 23rd July.  Tuesday’s sitting lasted only four minutes, with the Deputy President of the Senate, Hon Nyambuya, presiding.  After the prayers that start every Senate sitting, two items of business were conducted:

Hon Nyambuya announced that he had died on Wednesday 29th July.  He was Minister of Lands, Agriculture, Water and Rural Resettlement, Leader of Government Business in the Senate and Senator for Mashonaland Central Province.  All present rose and observed a minute’s silence in respect for the late Senator.

Until a further announcement is made by the Clerk of Parliament, Parliament remains shut down.  Anyone intending to submit any documentation to Parliament or seeking information from Parliament is requested to use the following email addresses: clerk@parlzim.gov.zw; or chokuda@parlzim.gov.zw.

Backlog of Bills in the National Assembly

As notified by Veritas in a special Bill Watch bulletin [link] disseminated early evening on 9th July, the Minister of Justice, Legal and Parliamentary Affairs presented this Bill that afternoon, followed by his Second Reading speech and the presentation of the Portfolio Committee’s report [link] on the public hearings on the Bill.   Backbenchers then began making contributions to debate.

For launch of Second Reading stage

Financial Adjustments Bill [link]   Although this Bill dates from last year, the Minister of Finance and Economic Development has not yet started off the Second Reading stage with a speech explaining the Bill.

Debate on the Death Penalty in the Senate

The debate on Senator Makone’s motion calling for the abolition of the death penalty by repealing all statutory provisions for it is due to continue when the Senate eventually meets again.

For those interested in the issue, Veritas refers you to our easy-to-read booklet available on the Veritas website – Should Zimbabwe Abolish the Death Penalty? The Facts : The Case for Abolition [link].

The Zimbabwe Electoral Commission [ZEC] gave public notice in the Government Gazette of 31st July by General Notice 2078/2020 [link], that it had received notice from Parliament of fifteen vacancies in proportional representation seats in Parliament.  Seven of these are from the National Assembly and eight from the Senate.  These vacancies had been previously announced in Parliament by the Speaker and the President of the Senate, respectively, citing section 129(1)(k) of the Constitution.  The vacancies arise from Parliament’s acceptance of the recalls of fifteen MDC-A party list members of Parliament by the leadership of the MDC-T.  The MDC-T leadership acted on the basis that they were restored to office by the Supreme Court judgment of 31st March 2020 in the case of  MDC and Others v Mashavira and Others, Judgment 56/2020 [link].

Under section 157(1)(d) of the Constitution, these vacancies do not necessitate by-elections.  Instead, this provision stipulates that every party list vacancy must be filled by a person belonging to the same political party as the former incumbent did and must be of the same gender, but leaves the procedure for filling vacancies to be provided in the Electoral Act.

Section 39 of the Electoral Act is the relevant section.  Section 39(4) provides that upon being notified of vacancies in the proportional representation seats in Parliament, ZEC must notify the public of the vacancies by notice in the Gazette and, at the same time as the notice is gazetted, must invite the political party [i.e. the political party to which the former incumbents belonged] to nominate suitably qualified persons to fill the vacant seats.  If the Chief Elections Officer is satisfied that the nomination papers are in order, ZEC will then gazette a list of the nominees and invite objections to the nominees from members of the public.  Finally, in the absence of valid objections, ZEC will gazette a notice appointing the nominees as members of Parliament to fill the vacant seats, as it did for the eight-month old National Assembly vacancy referred to in the paragraph below.

BUT The legal situation on the legitimacy of the MDC Alliance vis-à-vis the MDC-T is still sub judice.  Whether the recalls by MDC-T still stand after the 31st July [the deadline the Supreme Court gave for a fresh MDC-T Congress to elect the leadership] is also legally questionable.  If ZEC goes ahead with filling these vacancies on the basis that the recalls were valid, it may find itself embroiled in legal proceedings.

ZEC has gazetted the appointment of Esther Nyathi, the nominee put forward by ZANU PF, as a party list/proportional representation [women’s quota] member of the National Assembly.  The appointment is in terms of section 39(7)(a) of the Electoral Act and with effect from the 31st July 2020.  See General Notice 2079/2020