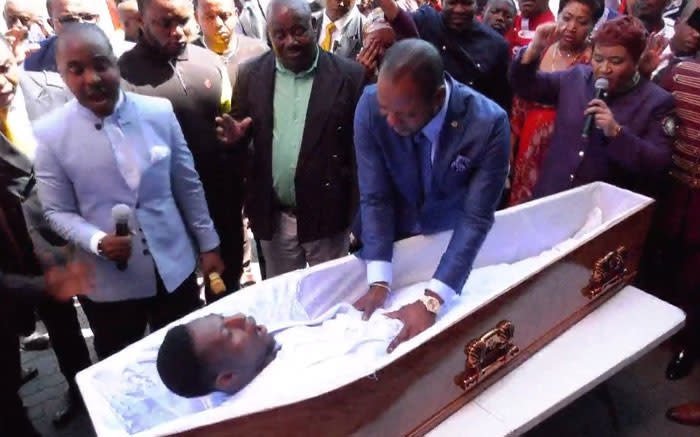 A case against two people who allegedly participated in the hoax resurrection of a Zimbabwean national at Alleluia Ministries was provisionally withdrawn in the Johannesburg Magistrates’ Court on Wednesday.TimesLive reported that National Prosecuting Authority (NPA) spokesperson Phindi Mjonondwane confirmed that the case against Nkululeko Dlamini, 35, and Silungisani Sibanda (also known as Grace Ncube), 40, had been struck off the roll. The pair faced fraud charges.In February, a video clip of a man identified as Elliot Moyo went viral, after he was “resurrected” from a coffin by church leader, pastor Alph Lukau.

The video, which was widely shared, showed Moyo rising from a coffin as Lukau prayed for him. Sibanda and Dlamini were later arrested.

Lukau, however, made an about-turn and distanced himself from the resurrection, saying the man was already alive when he arrived at the church.

Reports later surfaced that Moyo had died in Zimbabwe following the incident, according to News24.

Incredible Happenings church leader, Paseka “Mboro” Motsoeneng, issued a media statement in which he and the SA Funeral Practitioners’ Association (Safpa) voiced their displeasure at “such an antic for the sake of quick fame and cameras”, News24 reported.

Motsoeneng announced that he would confront Lukau for “bringing Christianity into disrepute”, but he was not allowed to enter the church venue when he went there.

“We want to warn all pastors and preachers who are scamming people. It must stop,” he said.

“All of you who are scamming our people, you must run. We are coming.”

News24 reported earlier this month that police spokesperson Captain Kay Makhubele said the search for Moyo would continue and he remains wanted until police are informed that he is dead.