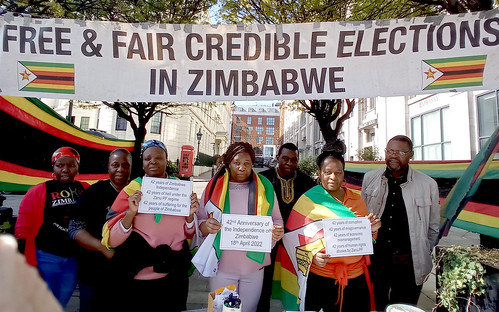 The leader of the Citizens Coalition for Change, Nelson Chamisa, says the fog has cleared and the party’s success in the recent by-elections had shown that it can win the 2023 election and form the next government of Zimbabwe.

Chamisa said the new party’s success came despite ‘state-sponsored machinations’. The CCC had won 19 out of the 28 parliamentary seats at stake and 75 of the 120 contested seats in local authorities. ‘We won against all the odds, including very controversial conduct and blatant partisanship by the Zimbabwe Electoral Commission’.

He added that the voter turnout had been poor and it was critical that, to defeat authoritarianism, people must vote in large numbers. ‘I was pleased to see that we fielded polling agents at all polling centres and that communities rallied around them, providing food and comfort during those many long hours keeping an eye on the process.’

Chamisa appealed to every eligible person to register to vote, particularly young people who should take advantage of the opportunity now available to get national identity cards. ‘It is your future that is at stake, but right now it is being decided by older generations’. (See: https://www.zimeye.net/2022/04/13/chamisa-the-fog-has-cleared-in-zimbabwe-full-text/.)

Meanwhile, NewZimbabwe says secret talks are underway between Chamisa and President Mnangagwa over a possible coalition.  Quoting ‘highly placed’ sources in Zanu PF, the government and intelligence services, it says under discussion is the formation of a seven-year government of national unity.

NewZimbabwe says that, according to the sources, both Mnangagwa and Chamisa are keen to avoid next year’s general election. Mnangagwa has a legitimacy problem and the intelligence services apparently do not give him a good chance of winning the election with the economy in bad shape. For his part, Chamisa is said to fear that, although he may win the election, he may be blocked by the security services (see: https://www.newzimbabwe.com/exclusive-mnangagwa-chamisa-in-secretive-gnu-talks/).

The need for a change of government in Zimbabwe is underlined by the plight of the angry villagers in Maramba-Pfungwe who are complaining about the failure to rehabilitate roads in the area. It is a traditionally Zanu PF stronghold but local MP Tichaona Karimazondo said that, despite state claims, it had been many years since the roads were given any attention. The chairman of a parliamentary committee Oscar Gorerino admitted after visiting the area that government officials had given false reports on progress. Certainly, local people are quick to talk of corruption (see: https://www.newsday.co.zw/2022/04/zanu-pf-supporters-blasts-government-over-lies/).

Against this, one piece of good news is that the Auditor-General Mildred Chiri has reversed a decision to stop naming those accused of involvement in corruption. The Auditor-General was threatened with legal action by some of the accused but Chiri now says that people who do business with the government should realise that they are exposing themselves to public scrutiny. Her reports have exposed massive corruption (see: https://thestandard.newsday.co.zw/2022/04/17/auditor-general-to-name-and-shame-corrupt-bigwigs/).