Elita Chikwati
Senior Reporter
ZIMBABWE became the first African nation to receive the second batch of Covid-19 vaccines from China with President Mnangagwa saying the country is making steady progress in the fight against the global scourge.

At  a ceremony held at Robert Gabriel Mugabe International Airport yesterday, the President received the second batch of 200 000 Sinopharm vaccines gifted to Zimbabwe by China and 200 000 Sinovac doses that the country procured from the Asian economic powerhouse.

The country last month received the first half of the 400 000 vaccines that were donated to Zimbabwe by China as the two countries scale-up their longstanding relations that date back to the liberation struggle.

The arrival of the vaccines from China comes at a time when the country is inoculating its populace against the Covid-19 virus in a phased approach that started with health workers and other frontline personnel.

In its fight against Covid-19, Zimbabwe has set aside a US$10 million war chest that will be used in the purchase of vaccines that the President said are key towards realisation of herd immunity and guaranteeing the attainment of Vision 2030, to become an upper-middle class economy.

Speaking after receiving the Covid-19 vaccines and consumables, the President said the arrival of the second batch of vaccines marked another milestone in the robust development and consolidation of bilateral relations and co-operation between Zimbabwe and China, in relation to the on-going fight against the Covid-19.

“We are making steady progress in the fight against the pandemic and in the on-going national Covid-19 vaccination roll-out programme.

“We remain thankful to China for the support of this programme. This includes the timely provision of epidemiological expertise and personal protective equipment (PPE) among other aspects,” he said.

“We are determined to emerge out of this pandemic with greater capability to play a more effective role towards peace, harmony and prosperity within the community of nations.

“The People’s Republic of China’s unparalleled readiness to avail access to the vaccines for commercial procurement testifies to our shared and mutual desire to continue enhancing co-operation particularly in these times of distress and competition for resources.

“The fact that we are the only country in Africa which has to date received the second batch of the vaccine doses from China, attests to the strong, comprehensive and strategic nature of our partnership. We look forward to broadening and deepening our relations in the post Covid-19 era,” he said.

The President, who was accompanied by Chinese ambassador Mr Guo Shaochun, expressed gratitude to Chinese President Xi Jinping and the Chinese for the generous gesture of support which he said had lightened the burden of Covid-19 and had impacted positively on health, protection and recovery of the people. 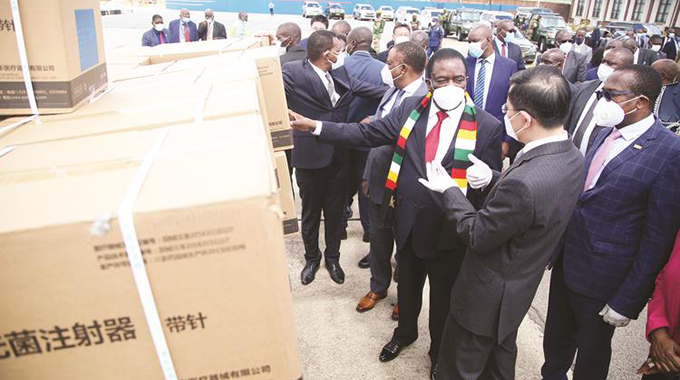 On his part, Chinese Ambassador Guo commended the President and Government for containing the second wave of the pandemic and rolling out the national vaccination programme.

He said China was committed to working with the international community in providing support for all people to access Covid-19 vaccines.

China has joined the Covax, a global facility, which aims to enhance collaboration among nations so as to accelerate the development, production, and equitable access to Covid-19 tests, treatments, and vaccines. And so far it has committed to providing 10 million doses of vaccines to developing countries.

Ambassador Guo said Zimbabwe was among the first countries to receive vaccine donations from China and one of few to which China has donated twice, signalling great friendship and solidarity between the two countries.

He added that China promotes international vaccine cooperation with more than 60 countries having authorised the use of Chinese vaccines.

“The safety and effectiveness of Chinese vaccines are earning recognition across the world. So far, we have donated or are donating Covid-19 vaccines to 69 developing countries in urgent need, and exporting vaccines to 43 countries.

Health Minister VP Chiwenga said with the latest shot-in-the-arm Zimbabwe is going to intensify vaccination rollout plans and include other groups such as teachers.

“We are now going into the second phase with vigour, including, for example, teachers so that the education system can operate at full throttle.

“We are also looking at the heads of religious denominations and people with chronic illnesses,” he said.

Apart from the vaccines, Zimbabwe also received 1,2 million medical consumables that were procured from China.

Part of the consignment that arrived yesterday also included vaccines for Namibia which President Mnangagwa said will be delivered to that country by Zimbabwe for free.

Newer Post
If Zimbabweans can’t even stand up against non-brutal opposition urban authorities who’re failing in service delivery, then what do we really want?
Older Post
TM fraud: Another suspect nabbed