Covid-19: To defy or not to defy lockdown

Source: Covid-19: To defy or not to defy lockdown | The Herald

Mbare residents, traders and vendors go about their daily business regardless of lockdown restrictions imposed to curb the spread of covid-19

In Mbare, anything and everything goes! It might as well be called a bastion.

The above statement sums up the view that most Zimbabweans have of the country’s oldest high density suburb, formerly known as Harare Township, before Independence in 1980.

It is a bustling district that conjures different memories among citizens and foreigners alike: the nostalgic, grisly, regretful, hopeful, gleeful and simply unsayable.

Located about five kilometres to the south of the central business district of Harare, Mbare has seen it all since its birth in 1907. Its creators, colonial settlers of Rhodesia, never thought of it as more than an abode of impoverished migrant workers from Mozambique, Zambia (Northern Rhodesia) and Malawi (Nyasaland), particularly males, whose wives were not allowed.

In colonial Rhodesia, the city was the colonist, the oppressor, the master, the white man’s strong forte from which he debarred the African, whom he reduced to a wayfarer who could only stay at the settler’s largesse as a trader of sweat, blood and toil. The black man could only temporarily visit as a labourer, and once sapped of energy he had to retreat to his rural home where his family was confined.

The Native Passes Act of 1937 forced Africans to possess permits (passes) bearing their names and those of their employers to be allowed to stay in urban areas. Even when hostels and townships were constructed for them, starting with Harare, the idea was only to perpetuate colonial capital. Urban regulations were skewed in favour of whites.

The black man’s abode was an infertile and measly space somewhere in the Tribal Trust Lands of lack where neither school, hospital, rains, clinic nor life could be found without having to eke it out.

Chief Mbari and his Makorekore people, therefore, saw themselves landless, as the colonial capital displaced them. Chief Chivero also lost out to the colonial juggernaut.

But the white man was wrong, as Mbare became a monumental suburb, one that went on to shape the destiny of Zimbabwe in its own way. Out of the womb of the sprawling settlement came gifted luminaries in music, politics, soccer, business, community development, performance arts and boxing among other trades. 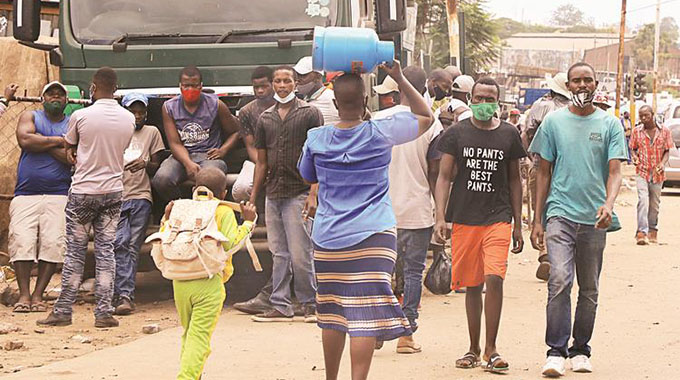 Mbare was, and remains the link to other suburbs; low, medium and high density. It links Harare and other provinces through its long distance bus terminus. Way before the arrival of the Harare International Roadport in the capital’s CBD, Chitungwiza Town Centre Roadport and Roadport High Glen, Mbare was the hub linking the country to the region and beyond.

The ear-piercing honking, the animated whistling, the shrills of dejection, the loud touting to attract clientele to just about anything on offer, the din from both humans and machines, are what mark or rather marked Mbare Musika and its vicinity.

Then Covid-19 hit the headlines across the world.

A new normal had to be enforced to curb its spread. The never-sleeping Mbare, where the sun never sets, had to be put to sleep. Not through a lullaby, but by law enforcement; and naturally something has to give.

Running battles between the police and residents, mainly vendors and traders, ensue as common sense favours the stomach, and reason pushes for life. The police cannot give, because to do so would be surrendering authority in the middle of a deadly and relentless scourge.

The Mbare Produce Market remains a hive of activity; not illegally though, as farmers are classified as essential service providers under the Level Four lockdown regulations. However, almost all rules pertaining to the containment of the deadly contagion are put on ice.

Used to their trades and way of life at Siyaso, around Mupedzanhamo, along Cripps Road, Magaba, southwards of Remembrance Drive, around Matapi, in the proximity of Rufaro Stadium, in the surrounding open spaces and along the road that passes OK Supermarket, the traders and vendors remain defiant.

Covid-19 could go hang, they seem to be saying as they respect neither social distancing nor masking up protocols. Thus, the cat and mouse race continues with no end in sight.

And the storyline remains the same: livelihood or death by Covid-19. In this story, which is told over and over again, only two options ensure, mainly because that is what common sense favours — the stomach.

The police, who would have none of it, and keeps maintaining a heavy presence in the suburb, at one point had to use tear smoke to disperse the defiant mobs. As witnessed by The Herald, the hordes kept on regrouping, even before the police details were out of sight.

“In matters of life and death my brother, one naturally chooses life. But Covid-19 has brought us limited options in deciding on such matters. The issue is no longer about life and death, but how to die.

“It’s either one dies of hunger, or Covid-19, and I choose to live on a full stomach to fight the virus another day, because my family relies on me”, 38-year-old trader, Ponesai Manjengwa, told The Herald on yet another visit on Wednesday. 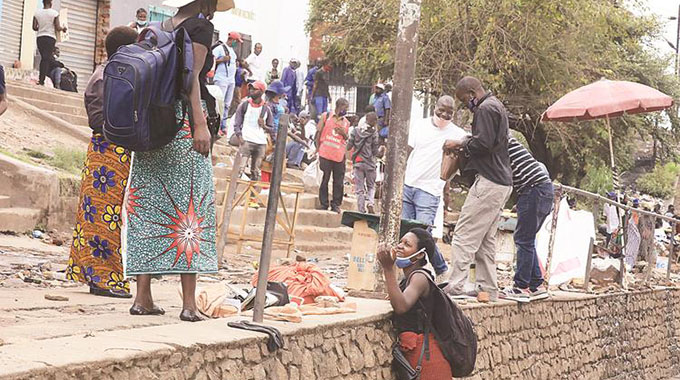 He said he was aware of how contagious and deadly the new coronavirus was, but he had to weigh his options, since his tailoring business was also affected by the national lockdown. Like many others in his situation, he chose to pursue common sense against reason. The area that he operates from, adjacent to the south-western end of the long distance terminus, however, appeared to be deserted.

The eastern end was also desolate save for a group of children who had set out their goalposts in the deserted bays and partook in a game of soccer with their cherished chikweshe (plastic ball).

“The police are always moving around, and rightly so; but this is affecting our businesses. Mbare is a populous suburb. Most of the people you see here are residents, who are either bored of sitting indoors, or are out shopping. Some are traders from other areas or visitors, who use Mbare as a link to other destinations,” Manjengwa said.

“Many of the women and young people trying to eke a living around Mbare Musika stay in Mbare flats and other adjacent residential areas. These people have always been spending their time in the marketplace in search of survival.

“Chasing these people from the market using teargas is like chasing them from their community and homes. It doesn’t work, and there is no social distancing in their homes due to congestion,” said Mr Dhewa.

Mr Dhewa said there were many people who were driving to Mbare to fetch different goods, therefore, when the police descend on marketplaces in the suburb, those people will not be affected, but vendors and traders will be left counting losses as they cannot easily gather their wares before running away.

An elderly vendor, who had momentarily left her trading space a few paces from the traditional merchandise marketplace when the police vehicle passed, expressed similar sentiments.

“Tear smoke or no tear smoke, life has to go on. Yes, Covid-19 is real, but if I do not sell these wares, my family will starve. So, I would rather play hide and seek with the police than stay at home,” she said clutching her bag containing a potpourri of skin lightening creams, cigarettes and other wares.

The same story plays on repeat as vendors and traders expressed the limitations that the nature of their businesses placed on their shoulders as they have to balance survival with the need to guard against contracting and spreading the new coronavirus.

With other avenues of bringing bread and butter to the table appearing to be closed, blocked or rendered non-existent, due to lockdown restrictions, vending seems to be the only option; many forms of vending.

Vending has gone beyond selling on pavements in the CBD to hawking from parked vehicles along highways, and on any other corner in residential areas in contravention of lockdown regulations.

“Professionals with cars have invaded vending sites, and can easily sell from car boots and simply drive away when they see the police approaching. Vendors cannot quickly gather their stocks and run away.

“When people are hungry they don’t obey regulations and can devise ways of hiding from law enforcement, including resorting to night trading, which can be a real super-spreader,” Mr Dhewa said.

He said the curfew hours were also aggravating the situation, particularly for farmers and fresh produce traders. Enforcing movement to start at 6am, which is also the new opening time for the farmers’ market, he maintained, makes vendors from high density areas lose out on quality commodities.

“As vendors scramble for the remaining merchandise, it becomes impossible to enforce social distancing and masking-up. Due to insufficient public transport, vendors also stampede to buy in order to quickly look for transport,” Mr Dhewa said.

Poor infrastructure at Mbare Musika and other marketplaces, makes sanitisation difficult. Sanitisation that used to be done at entry points in the early days of Covid-19 has long been abandoned due to lack of resources, among other reasons.