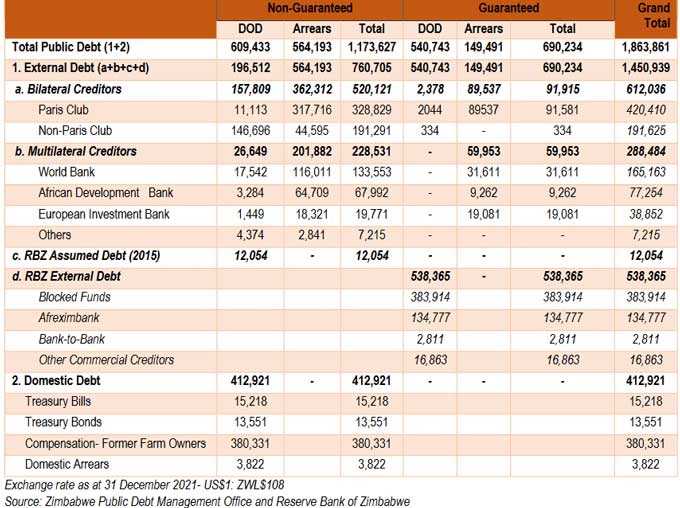 BY SHAME MAKOSHORI
The government, overwhelmed by rocketing debts and surging interests, has revealed that it is contending with “protracted challenges” to slow down rocketing arrears, as new data indicated “token payments” to the Paris Club totalled US$4,8 million in 2021.

Zimbabwe, which is classified to be in debt distress by the International Monetary Fund (IMF), now has to settle a further US$420,4 million to pacify the Paris Club before moving to tackle more unsettled commitments estimated at over US$17 billion across lenders.

Harare had defaulted servicing debts to Paris Club and other creditors for about 15 years until it paid up its dues to the IMF in 2015, hoping to open the floodgates for fresh lines to save a haemorrhaging economy.

Major lenders have demanded that it clears debts to the World Bank, the African Development Bank, the Paris Club and others before approaching them.

Their stance forced Harare to announce in September last year that it would kick off token payments to the Paris Club under a refreshed plan to clear debts and reintegrate into the global financial system.

In the Annual Debt Bulletin 2021 Financial Year report, the Zimbabwe Public Debt Management Office demonstrated how desperation had crept in over Harare’s vicious debt trap, and how authorities have been battling to make amends.

“During the period January to December 2021, Treasury made total external debt service payments amounting to US$59,30 million, comprising of US$49,7 million for the active portfolio and US$9,60 million as token payments to the multilateral development banks (MDBs) and Paris Club creditors,” the office said.

“Government in September 2021, started making US$100 000 quarterly token payments to each of the 16 Paris Club creditors.

Harare has blamed a gruelling economic crisis for its ballooning debts, which reached over $1,9 trillion (about US$17 billion) at the end of last year, attracting US$6,6 billion arrears.

Lenders want these to be addressed before they return to the fold.

Unless Finance minister Mthuli Ncube convinces the Paris Club to forgive Zimbabwe, or structures a plan that gives him capacity to quickly extinguish the debt, a payment rate of about US$5 million a year would mean Harare would only clear its debts in 84 million years.

In the past few years, the government has been trying to fast track debt repayments by mortgaging swathes of platinum and goldfields, a position that resource campaigners have warned against.

They argue that future generations were being sacrificed.

The report said Zimbabwe struggled to access fresh loans to scale up ambitious plans to revamp key infrastructure projects after accumulating significant arrears on lifelines from one of China’s biggest lenders.

It said arrears to China Eximbank mounted during the period frustrating efforts for fresh disbursements, even as Harare honoured a pledge to Paris Club members.

China Eximbank has been one of the most active big lenders on the domestic market, where it has bankrolled crucial public infrastructure projects including airports and power stations.

“Disbursements of external on-lent loans, for the period January to December 2021, which were from the China Eximbank for the Zimbabwe Power Company (ZPC) Hwange 7 & 8 Thermal Power Station project and the India Exim Bank for the Zimbabwe Power Company Deka Pumping Station and River Water Intake System project, amounted to US$24 million and US$3,9 million respectively,” the Ministry of Finance and Economic Development said.