Dialogue with teachers can achieve better progress, not threats 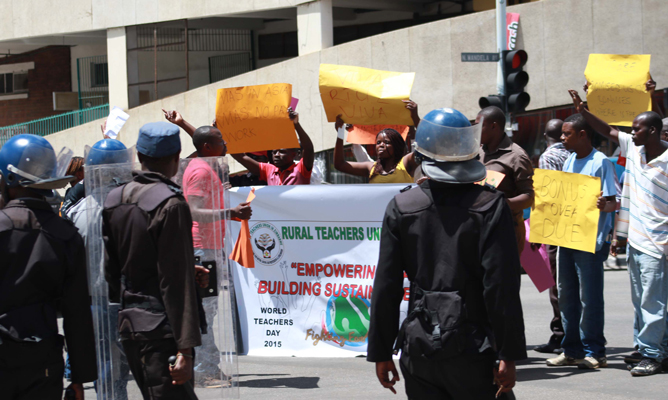 By now, it must be common knowledge that token salary increases will not work, and are not working.

And this is for the umpteenth time.

For some time now, teachers have been demanding pre-2018 United States dollar salary of US$520 or the local currency equivalent.

In early January, the government announced that it would pay civil servants a US$75 COVID-19 risk allowance perhaps to silence growing calls for pre-2018 salary.

And as if to remind the government that they were not swayed by the US$75 token, Amalgamated Rural Teachers Union of Zimbabwe (Artuz) members staged a demonstration outside the National Social Security Authority (Nssa) building during salary negotiations.

In typical fashion, armed riot police swooped on the protesting teachers and arrested 16 of them, including their leader Obert Masaraure, who spent days in cells.

This action alone was a violation of basic trade unionism as recognised by law and the International Labour Organisation (ILO) to which Zimbabwe is a member State.

But public sector workers, including teachers, being denied the enjoyment of these rights.

The government has been systematically violating the right to collective bargaining, right to organise and to strike using threats, arrests and detention.

Under normal circumstances, learners are supposed to be in class with teachers providing the essential service after schools reopened on Monday following a long COVID-19-induced break.

But because the government is hard of hearing and does not care about teacher welfare, no learning is taking place at several schools across the country after teachers declared incapacitation.

Headmasters, who supervise teachers, have also said they are incapacitated to report for duty.

But instead of engaging in genuine dialogue, the government has chosen to threaten the educators through docking their salaries. Social dialogue and collective bargaining are in fact instruments that can lead to more effective and efficient services and to decent working conditions that respect the dignity of educators.

But the results are there for all to see as nurses and other health workers have left in numbers for greener pastures, leaving hospitals and clinics manned by students.

The government should do the right thing and respect its workers, including ensuring that teachers are paid good salaries in order for them to report for duty.

Learners have suffered enough having missed out on lessons since COVID-19 hit the country in March 2020.

For the sake of the country’s education, and the future of children, government needs to address the needs of teachers and broadly, its workers.