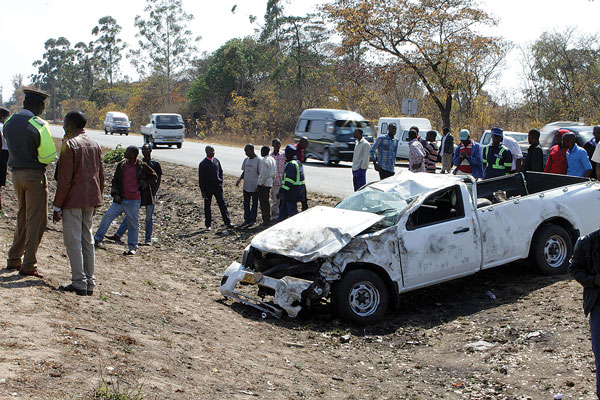 BY MIRIAM MANGWAYA
SEVENTY-THREE people died in road traffic accidents during the just-ended Easter and Independence holidays while 202 others were injured, police said yesterday.

In a statement, police said there was an increase in the number of people who died in road traffic accidents this year during the Easter holiday compared to the same period last year when 24 people lost their lives and 117 were injured.

According to the police accident table, there were 32 fatal road accidents resulting in 73 deaths during this year’s Independence and Easter holidays compared to 22 recorded last year.

The police attributed the accidents to human error.

“The Zimbabwe Republic Police has noted with concern the number of fatal road accidents recorded during the combined Easter and Independence holidays from April 15 to 18, 2022. A comprehensive analysis by the police has revealed that most of the accidents are attributed to human error, which includes speeding, inattention, misjudgement, overtaking errors and failure to observe road rules and regulations by drivers,” the law enforcement agents said.

“Most serious accidents occurred during the night where most travellers were observed to be moving in large numbers, ignoring safety numbers and overloading vehicles, especially those who intended to go to public gatherings for the Easter commemorations.”

The most fatal accident was the one that occurred at the 5km peg along the Chipinge-Chimanimani road, which claimed the lives of 38 members of the Zion Christian Church.

The World Health Organisation in 2021 stated that Zimbabwe has the highest mortality rate in the Sadc region of five people dying every 24 hours in road traffic accidents.