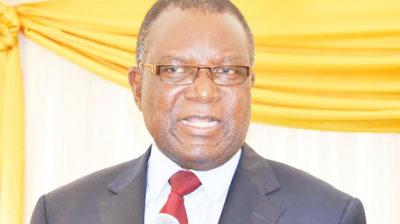 Gumbo, who becomes the first casualty since the current Cabinet was appointed in September last year, was reassigned to a less glamorous position of Presidential Affairs minister responsible for implementation and monitoring.

In a statement last night, chief secretary to the President and Cabinet Misheck Sibanda said: “His Excellency, the President of the Republic of Zimbabwe and Commander-in-Chief of the Defence Forces, Cde ED Mnangagwa has made the following senior appointments and re-assignments. Hon minister Joram McDonald Gumbo has been appointed the Minister of State for Presidential Affairs in charge of implementation and monitoring. Hon Fortune Chasi, the current Deputy minister of Transport and Infrastructure Development, has been appointed Minister of Energy and Power Development.”

Gumbo recently denied responsibility for the fuel crisis and blamed Reserve Bank of Zimbabwe governor John Mangudya for failing to provide the much-needed foreign currency to allow fuel dealers to access the resource from the bonded warehouse in Harare.

“Industry must provide the forex so that they (Reserve Bank of Zimbabwe) can dish it out (to import fuel). I had released 20 million litres of fuel last time, 12 million litres of diesel and eight million litres of petrol, into the market from the strategic reserves of government. So you talk to Mangudya about the matter,” Gumbo said then.