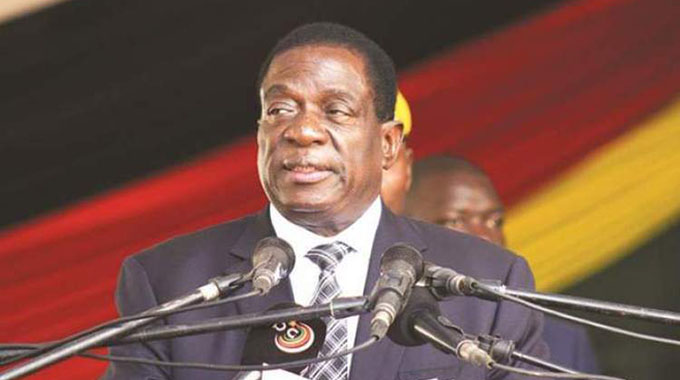 Elita Chikwati Senior Reporter
President Mnangagwa will today officiate at the groundbreaking ceremony for the modernisation of Robert Gabriel Mugabe International Airport. The project is being funded by a $153 million loan facility from China Eximbank.

Transport and Infrastructural Development Minister Dr Joram Gumbo yesterday said the modernisation of Robert Gabriel Mugabe International Airport would have a massive impact on the tourism sector and the economy at large.

He said after completion of the project, the number of tourists and airlines coming to Zimbabwe was expected to increase and this will positively impact on the country.

“The modernisation will bring a lot of business in Zimbabwe,” he said. “It will lead to growth in tourism. Tourists coming into Zimbabwe annually are about 2,5 million and we expect the number to grow to around six million per year. The expansion of the airport will also lure more investors to Zimbabwe.

“More airlines will also be interested in coming to Harare. Look at what has happened at Victoria Falls. Since the modernisation of the airport, there has been an increase in the number of airlines and some are still applying.”

Dr Gumbo said Zimbabwe was working hard to connect and reconnect with the outside world like Europe, America and Asia and the modernisation of the airport was another way of achieving this.

He said the ministry was working on a plan where Air Zimbabwe service local and regional routes using smaller planes, while Zimbabwe Airways will service international routes.

“We also want to improve security at the Robert Gabriel Mugabe International Airport so that it becomes reputable and internationally recognised,” said Dr Gumbo.

“We will have VVIP sections so that the VIPs will not disrupt the normal operations at the airport. Our airport has one of the longest runways worldwide and this is an advantage.”

Dr Gumbo said the ministry was working to make the Robert Gabriel Mugabe International Airport a hub of aviation in Southern Africa.

He said it was time that Zimbabwe modernised its airport as other countries in the region such as South Africa, Zambia, Mozambique and others were modernising theirs.

Through the upgrade, the car park will be transformed into a multi-storey facility, while modern airport bridges will be installed at new gates.
The runway will be expanded to allow simultaneous landings.

A new radar system will also be deployed to improve technology, while moving walkways, a slow-moving conveyor mechanism that transports passengers across a horizontal or inclined plane over a short to medium distance will also be installed.

Designs for the upgrade have since been completed and approved.