ED is the wisest citizen of Zimbabwe of all time- Khupe

The MDC-T presidency has unsurprisingly showered praises on President Emmerson Mnangagwa saying he is the “wisest” citizen in the country because he has favorable policies that are making the people of Zimbabwe happy.

Source: ED is the wisest citizen of Zimbabwe of all time- Khupe – The Zimbabwean 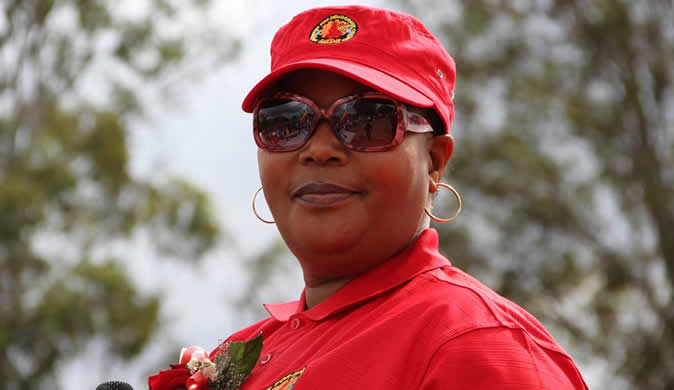 MDC-T vice president Thokozani Khupe who is one of the leading principals of Mnangagwa’s Political Actors Dialogue (POLAD) on Tuesday said the Zanu PF leader had made the people of Zimbabwe happy by introducing favorable amendment bills and empowering the disabled community.

She added that Mnangagwa “is the wisest citizen of Zimbabwe of all time”.

“I take this as a privilege to start by praising and thanking the mover of this motion and the other Hon. Senators who have debated before me. As is always the case, I feel very proud and happy to debate this motion. I will not say much because some of the issues were dealt with by the previous speakers.

“What I want to say is that His. Excellency, the President of the Republic of Zimbabwe, Dr. E. D. Mnangagwa proved beyond reasonable doubt that he is a man of the people with Zimbabweans at heart,” she said.

“Mr. President, it will not be an overestimation if it is declared today that according to me, His Excellency is the wisest citizen of Zimbabwe of all time. That is what I believe. I have got the reasons to do that. His Excellency did something which nobody expected that it can happen in this country. He surprised us and made us very happy, especially the disability community that for the first time, we have a Judge of the High Court who has visual impairment, Justice Samuel Deme. It has never happened and nobody expected that this will happen.

“He came in person to launch that. It might not be as perfect as people may expect but whenever there are gaps, I hope and believe that this should be corrected as we go on. It is better to have something. Nothing is perfect in this world; we always improve in whatever we have. The Japanese say kaizen, meaning continuous improvement in whatever we do.”

Khupe also praised the President for instituting the Private Voluntary Organisations (PVO) Amendment Bill which is highly contested with some observers accusing the government of wanting to tighten screws on the operations of non-governmental organisations in the country. But Khupe has welcomed it.

“They have formed some organisations and they call them PVOs, Civil Society Organisations, churches – not all of them of course, some under traditional communities yet if you look at some of them, you find that they are simply tribalistic organisations formed to push for a tribal agenda or some agendas you may not understand.

“When the Bill comes, people will have the opportunity to take what is right out of the present Act and throw away that which is not right. I think I support that the Bill be amended,” she said.

MDC-T leader Douglas Mwonzora also joined the praise band and thanked Mnangagwa’s recent State of the Nation Address (SONA) saying his party agreed with most of his plans.

“I would like to join other Hon. Members in thanking the President of the Republic for the address that he made to the nation. There is a lot of convergence on most of the issues. We do agree for example, with some of the items on the legislative agenda,” he said.

Mwonzora and Khupe were helped last year by the state security forces to grab the main opposition MDC Alliance headquarters in Harare.

Through a 2020 March Supreme Court ruling that declared Nelson Chamisa’s leadership of the opposition illegal, the two have since recalled more than half of the MDC Alliance MPs and Councillors from Parliament.

The National Assembly went on to declare Khupe the leader of the opposition in Parliament. Nehanda Radio