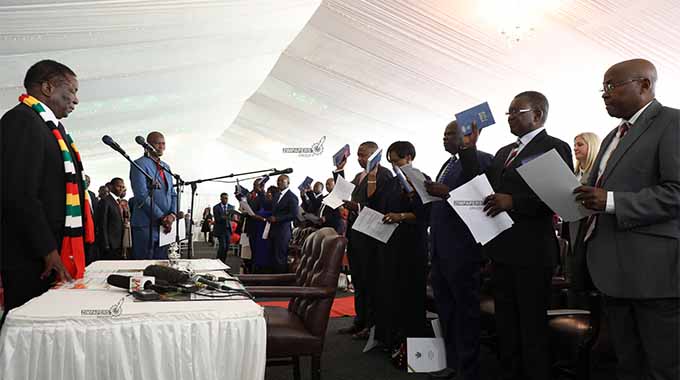 The July 30 elections gave birth to the Second Republic whose major thrust is economic transformation in line with President Mnangagwa’s Vision 2030.

The President is yet to appoint the Minister of State for Harare Province. He also swore in 14 deputy ministers to complete the new Government line up of the Second Republic.

After receiving letters of appointment in President Mnangagwa’s State House Office, the ministers then took their oath of Office at a public ceremony graced by senior Government officials and their family members.

As pronounced by President Mnangagwa in November last year, it is no longer business as usual and to attest to that, all the ministers were at State House by 7:30am for the swearing-in ceremony.

Officials in the President’s Office who were preparing for the smooth flow of things arrived at State House around 6:30am.

The arrival of the ministers and senior officials was followed by that of the two Vice Presidents Dr Chiwenga and Cde Mohadi.

President Mnangagwa arrived at around 8:45am and did not waste time to call all the ministers to receive their letters of appointment and a summary of expectations.

After the swearing-in ceremony, it was time for a group photo for the President and his new Cabinet team. All the ministers were in a jovial mood, generously granting interviews to the media.

The dominant message from the interviews with all the ministers was that of optimism and renewed sense of hope for the country.

The ministers expressed the desire to transform the economy and ensure that Vision 2030 enunciated by President Mnangagwa was achievable.

Finance and Economic Development Minister Professor Mthuli Ncube was the darling of the media as journalists swarmed him to hear what he had up his sleeve to deliver the country from the current financial challenges.

More importantly, the media was keen to know how he intends to deal with cash shortages. Kirsty Coventry, the new Minister of Youth, Sport, Arts and Recreation and Nqobizitha Mangaliso Ndlovu also had a fair share of attraction for the media.