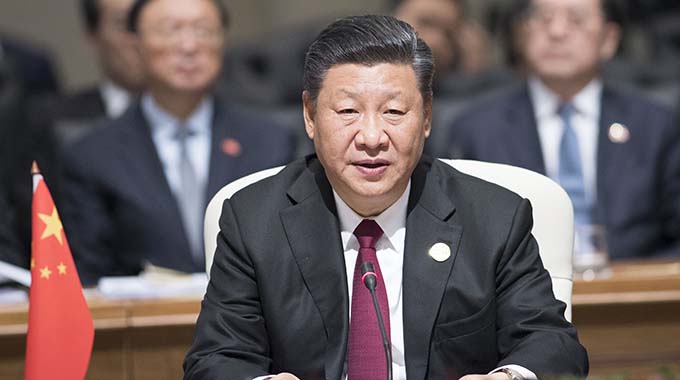 Zvamaida Murwira Senior Reporter
President Mnangagwa is set to hold bilateral talks with Chinese leader President Xi Jinping in Beijing next week aimed at further deepening relations between Zimbabwe and China when the two leaders meet during the Forum on China-Africa Cooperation (Focac).

The summit runs from September 3-4, 2018.
The Head of State and Government and Commander-in-Chief of the Zimbabwe Defence Forces will also meet China National People’s Congress chairman Mr Li Zhanshu.

This was revealed by Chinese Deputy Ambassador to Zimbabwe Mr Zhao Baogang while addressing journalists in Harare yesterday.

Mr Zhao said President Mnangagwa would be among several Heads of State from Africa to attend Focac summit, a platform for interaction between China and members of the continental body.

“Zimbabwean President Emmerson Mnangagwa is also invited and has accepted the invitation. He has just been inaugurated. On the sidelines of the meeting, on the afternoon of September 5 2018 President Xi will hold bilateral discussions with him. On the evening of that same day, our chairman of the China National People’s Congress, Mr Li Zhanshu, will also hold bilateral meetings with him and hold a welcome banquet,” said Mr Zhao.

He outlined several projects that China is carrying out in Zimbabwe which he said showed that Beijing valued its relationship with Harare.

During the Focac meeting, said Mr Zhao, two documents would be adopted.
He said one was a declaration to have a shared future consistent with the theme of the summit.

The theme of the summit is “China and Africa: Towards an even stronger community with a shared future through win-win cooperation”.

Mr Zhao said one of the objectives of the summit was to invigorate joint efforts to build a community with a shared future for humanity.

“The second document is an action plan which will cover measures to develop cooperation between China and African countries between 2019 and 2021. This is an important mechanism where the top leadership meet and exchange views and how to develop cooperation between the two sides. This is also an important occasion as it will review the progress that we have made in the past three years. It is also an important meeting that will draft the policy measures for the development of cooperation between the two sides in almost every field – political, economic, trade, finance, infrastructure people to people exchanges, security and military – almost in every field. It will cover quite extensive areas of the two sides,” said Mr Zhao.

He said the summit was also an important occasion for the union between China and African leaders, a family union.
South African President Mr Cyril Ramaphosa will co-chair the summit with Mr Xi.

“We will also have roundtable meetings where all the African leaders and Chinese president will deliver speeches expressing their views,” he said.

During the last Focac meeting in Johannesburg in December 2015, said Mr Zhao, China pledged $60 billion in loans to Africa and 90 percent of it has been disbursed and processed.

He said China’s relationship with Africa was driven by sincerity and good faith.