HARARE, Zimbabwe — Emmerson Mnangagwa of Zimbabwe’s ruling party was declared the winner early Friday morning of the country’s first elections since the fall of authoritarian leader Robert Mugabe. But the opposition, which has accused the ruling party of vote rigging, has vowed to protest the result.

According to the election commission, Mnangagwa narrowly avoided a runoff, winning 50.8 percent of the vote. His opponent, Nelson Chamisa of the Movement for Democratic Change (MDC), outperformed Mnangagwa in urban areas, particularly the capital Harare where he won 71 percent.

The count took almost four days to announce. On Wednesday, opposition protests against the delays turned violent, with some small groups moving around downtown Harare, looting and vandalizing. The military opened fire on the unarmed protesters, killing at least six people and injuring more. It remained unclear whether Mnangagwa played any role in their deployment.

Mnangagwa’s election comes at a critical juncture for Zimbabwe. Mugabe led the country for 37 years, and as his rule became increasingly repressive, it was isolated from the international community and plunged into economic crisis. For most of Mugabe’s years in power, Mnangagwa was his right-hand man.

But as Zimbabwe’s condition worsened and Mugabe’s unpopular wife, Grace, seemed poised to take over from her nonagenarian husband, some in his party turned against him. Mnangagwa, with the support of the military, forced Mugabe to resign in November and assumed the presidency. 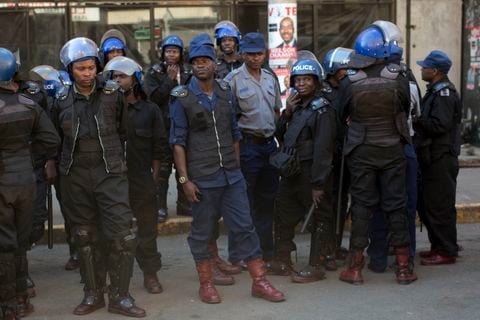 Zimbabwean police officers cordon off the streets around the MDC opposition party headquarters in Harare on Thursday. Zimbabwe’s acting president said Thursday that his government had been in touch with the main opposition leader in an attempt to ease tensions after election-related violence in the capital. (Jerome Delay/AP)

“This is a new beginning,” Mnangagwa tweeted shortly after his victory was announced.

He campaigned on a message of transformation despite being so closely associated with the only leader independent Zimbabwe has ever had. Much of the change he has promised is predicated on the international community’s stamp of approval. Zimbabwe desperately needs foreign investment, and flawed elections in the past have led to sanctions and reprieve.

The United States and the European Union have been clear that a credible election is their foremost condition for the lifting of sanctions on various Mugabe-era officials and their family members, as well as for backing a bailout for Zimbabwe from the International Monetary Fund.

International observers have expressed concerns with various aspects of the election, including widespread reports of voter intimidation and failure in some cases to post results outside polling stations once counting was completed. Election observers noted that the delays in the announcement of the results could damage the election’s credibility.

As the results were announced early Friday, two opposition spokesmen took over the microphone and said that the MDC “totally rejected” what they called “fake” results. Chamisa, the MDC’s candidate, had been assuring his supporters of victory for weeks.

[Mugabe is gone. But his tactics persist in Zimbabwe’s 1st election without him.]

On Thursday, large numbers of police patrolled Harare’s streets, which were eerily empty. Almost all businesses were closed.

Police cordoned off a large area of downtown surrounding the opposition MDC’s headquarters. Late in the day, they presented a warrant to MDC staffers and searched the building looking for laptops and weapons but did not confiscate any items.

After the MDC openly disputed the election results, more tension and confrontation was expected Friday.

Earlier on Thursday, Chamisa made his first appearance in public since the vote took place, visiting a hospital where those injured in Wednesday’s violence were being treated. He vowed to contest any results that did not match with what his party had independently tabulated.

On Wednesday, he had criticized the election commission’s delay in announcing a winner, tweeting, “The strategy is meant to prepare Zim mentally to accept fake presidential results.”