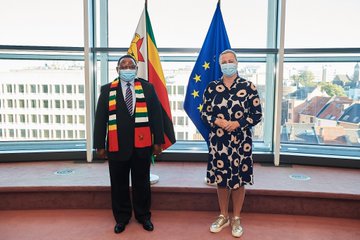 THE European Union (EU) has maintained a tough stance on Zimbabwe saying that the southern African country must fully implement the 2018 election observer mission recommendations (EOM) before the 2023 polls.

This was after Zimbabwe’s Foreign Affairs minister Frederick Shava on Monday met the EU Commissioner for International Partnerships Jutta Urpilainen for the first time in Brussels where the EU reiterated calls for electoral and economic reforms.

In a preliminary statement after the disputed 2018 polls, the EU observer mission noted electoral malpractices such as “bias in State media” in favour of Zanu PF, adding this meant “that a truly level playing field was not achieved.”

Human rights groups and the opposition have accused President Emmerson Mnangagwa’s government of being reluctant to implement reforms despite promises to do so.

Some of the reforms include the need to implement recommendations by the Motlanthe Commission of Inquiry which investigated the post-election violence of August 1, 2018, including ensuring that those responsible for abuses are held accountable.

Last week, the Zimbabwe Election Support Network which has been tracking progress on the implementation of the EOM recommendations, expressed concern that “most remain unattended at a time when Zimbabwe is barely two years away from yet another set of harmonised elections in 2023.”

“The authoritarian consolidation in Zimbabwe is extremely worrying, shrinking democratic space, weaponising the law against opponents and human rights defenders, attempts to destroy the opposition, and undemocratic amendments of the Constitution,” Hlatshwayo said.

Bimha said the reform agenda was already in place, adding that critics were not aware of the procedures and processes that government had to follow in implementing the reforms.

“The issue is that when you are not in government, it is very easy to criticise. When you are in government, you also realise that things don’t just happen. There are procedures and processes that have to be followed, and those things take time; they don’t happen overnight,” Bimha said.

“What we are happy about is that the government is keen on re-engagement and reforms. We are seeing reforms; the reform agenda is there to stay and we are happy with the pace.”