Even after Mugabe, Zimbabwe’s elections do not appear free or fair 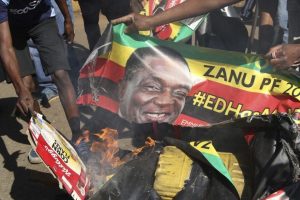 Source: Even after Mugabe, Zimbabwe’s elections do not appear free or fair – The Washington Post

On July 30, for the first time since 1980, Zimbabwe held general elections without Robert Mugabe on the ballot. Many Western donor countries have had sanctions on Zimbabwe since 2002 because of the government’s political repression and human rights abuses — and promised to lift these once the country held free and fair elections.

But free and fair do not appear to apply. Officially, President Emmerson Mnangagwa — a former Mugabe lieutenant who grabbed power in a November 2017 coup — won with 50.8 percent of the vote, narrowly avoiding a runoff election. And his ruling ZANU-PF party won a two-thirds majority of 149 seats in parliament’s lower house, permitting it to amend the constitution at will.

But those results are disputed. International election observers have pointed to irregularities. The opposition party has challenged the results, and the Constitutional Court must rule by Friday.

Here’s what you need to know about Zimbabwe’s irregular elections — and what’s at stake.

What was allegedly irregular about this election?

Observers from the European Union reported voter intimidation and lack of media coverage for opposition parties and candidates. U.S. observers reported that ZANU-PF used the military to intimidate voters, distributing food aid and other assistance only to party loyalists. The day after the election, Zimbabwe’s main opposition party, the Movement for Democratic Change (MDC), declared victory, claiming it had information from party agents at polling stations. The MDC also charged that 21 percent of the official results forms were not posted at polling stations, as regulations require, and accused the Zimbabwe Electoral Commission of manipulating the vote count to favor Mnangagwa.

All of this was familiar to those who know the history of Zimbabwe, a former British colony where the black African majority and a ruling white settler minority concluded a brutal war in 1979. Since 1980, Zimbabwe has faced an insurgency, ethnic cleansing, authoritarianism and a grossly mismanaged economy, reducing one of Africa’s most developed countries and a former breadbasket into poverty.

Why hold elections that will just rally the opposition?

In my forthcoming book, I examine late-colonial India, revolutionary Mexico and white-minority-ruled Rhodesia (now Zimbabwe) to find that peasant rebellions result in governments by elites, who then marginalize peasants. Zimbabwean elections are held for show so that international audiences will support the incumbent elites. They are not designed to enable people to change who’s in power.

Let’s look at the parallels between these different kinds of elections in Rhodesia and Zimbabwe.

Starting in the mid-1950s, the white minority government banned black African parties that opposed the literacy and property requirements that prevented the black majority from voting. Yet, those banned opposition parties steadily increased their demands for representation. The Zimbabwe African People’s Union (ZAPU) party was formed in 1961, led by educated, urbane black African leaders, demanding majority suffrage. Banned in 1962, its leaders arrested or exiled, ZAPU launched a rebellion. In 1963, white voters elected the Rhodesian Front, which supported independence from Britain without black majority rule. The Front formed a government in 1965 that the international community refused to recognize, imposing international sanctions.

By 1980, ZANU-PF — led by Mugabe and primarily representing the Shona ethnic group — had won the civil war and taken power. But its elections during the 1980s and 1990s were as authoritarian as those held by the white minority. ZAPU, representing the minority Ndebele ethnic group, was crushed by security forces, its leaders killed or driven into exile, until the 1987 Unity Accord absorbed ZAPU into ZANU-PF. White opposition parties could elect representatives only to parliamentary seats reserved for whites, discouraging broader political involvement.

But the Western community ignored Mugabe’s human rights violations. Despite rigged elections, British and American leaders accepted him as a pro-Western leader amid antagonistic governments.

In the 1990s, Zimbabwe’s economy declined because of excessive government spending and corruption. Mugabe faced mounting dissent and socioeconomic crises. His government confiscated white-owned farms and distributed the land to supporters, which resulted in near-famine. The West withdrew foreign investment and aid. Throw in hyperinflation and pandemics, and the MDC was leading a massive political opposition.

Using fraud and violence, Mugabe and ZANU-PF disregarded the results of the March 2008 elections and stayed in power. But the resulting regime could not muster broad international support. South Africa stepped in to broker a power-sharing agreement, and a 2009 unity government included both MDC and ZANU-PF ministers.

The MDC quit the unity government in 2013, accusing the ZANU-PF of rigging that year’s elections. The United States and Britain continued to maintain sanctions imposed in the early 2000s. But China had becomeZimbabwe’s main international benefactor, investing capital, selling defense equipment and offering development aid — without pressing for democratization.

All this mirrored the crisis that faced Rhodesia in the 1970s, including a declining economy, stalemated civil war and white flight. Much as Mugabe acceded to power-sharing — in name, at least — with the MDC, so in 1978 had Rhodesian Prime Minister Ian Smith reached a power-sharing agreement with moderate black groups that excluded the ZANU-PF guerrillas. The settlement enabled blacks to vote but barred land redistribution and kept whites in charge of the government and security forces. Although the 1979 elections resulted in a multiracial cabinet, ZANU-PF stepped up its insurgent campaign, and the international community refused to recognize the regime or lift sanctions.

Rhodesia’s civil war ended with the Lancaster House Agreement mediated by Britain, and ZANU-PF and ZAPU ran in the 1980 elections. Although ZANU-PF’s violence marred those elections, Britain accepted the results, and Mugabe’s government. The West lifted sanctions, and the United States and Britain offered aid — until reimposing sanctions in 2002.

Will the international community do the same with ZANU-PF’s latest dubious win and lift sanctions? If it does, then the 2018 elections — which entrenches leaders who depend on China’s largesse — would confirm yet another Zimbabwean election as a successful performance by authoritarian rulers to satisfy international audiences.