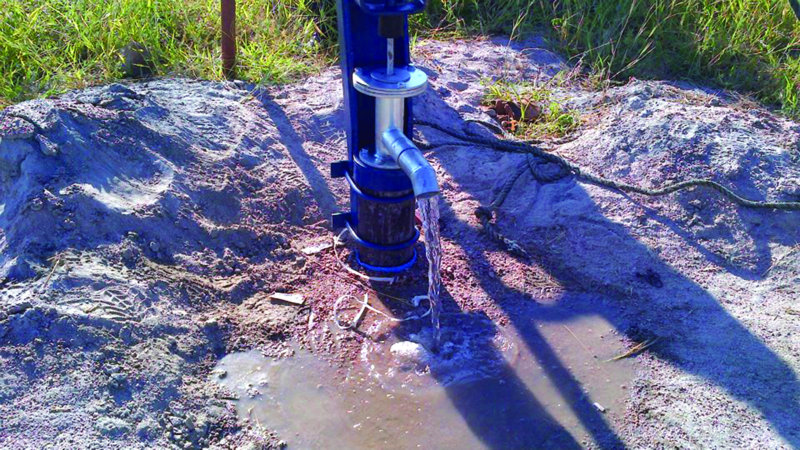 BY MOSES MUGUGUNYEKI
IT was all smiles for Shylet Makondo, Sarah Matsambo, Roselyn Sibanda and Rumbidzai Chauke of Mesa village as they made their way to a borehole in Chilohlela village, ward 15 in Chiredzi rural.

They could not hide their joy because for the past five years the quartet and many other families in this part of Chiredzi rural have been fetching water from an unclean source — a shallow well — following the breakdown of the only borehole in the area.

Chiredzi rural is a low-lying area in south-eastern Lowveld characterised by recurrent droughts, which sometimes are followed by floods.

Here resides one of the most marginalised communities in the country.

The close by Gonarezhou National Park also poses a threat to communities in this area as stray wild animals pounce on the little crops that they would have grown.

The perennial water problems in Chiredzi rural affect Makondo, her peers and many other people directly as it burdens them with the additional task of fetching water from distant places or from the crocodile-infested Mwenezi River.

A recent Zimbabwe Demographic and Health Survey says the national coverage of improved water service provision stands at 78%; 69% for rural and 97% in urban areas, while improved sanitation stands at a mere 37%.

As climate change continues to wreak havoc in the Lowveld, villagers are helplessly watching their sources of water dry up; their crops wither and fail while their health is exposed to infectious diseases.

“We used to wake up early in the morning to fetch water from the well after the borehole broke down,” Makondo said.

“If you go to the well late in the day, you would find nothing as the water would have been depleted because of the high temperatures.

“Today, we are happy that our borehole which was not functional for the past five years is now working.

“Our survival is pinned on this borehole and the water that is underground.”

An analysis by the British Geological Survey (BGS) and WaterAid says groundwater has the potential to save hundreds of thousands of lives and can be the world’s insurance policy against climate change.

Ester Chikilimusi, chairperson of the Chilohlela Borehole Committee, said there was need to invest more in underground water.

“With boreholes you never go wrong when it comes to sustainability of communities and I urge our authorities to drill more boreholes to ease pressure on the few that we have,” she said.

Chikilimusi said rising temperatures coupled with extreme droughts and floods driven by climate change posed an increasing threat to the lives of hundreds of people in her area.

“Our area receives erratic rainfall and we suffer chronic food shortages,” she said.

“Even if we grow the crops, wild animals from the national park would come and destroy them. We are in a catch 22 situation.”

She said communities in her area needed sustainable and safe water as well as sanitation to mitigate impacts of extreme weather, especially droughts and floods.

As a result of the challenges faced by communities in Chiredzi rural, the Zimbabwe Red Cross Society (ZRCS) has embarked on a programme meant to help villagers cope with climate change impacts such as drought and floods.

The programme, which is being implemented under the Disaster Response Emergency Fund (DREF) and funded by the International Federation of Red Cross and Red Crescent Societies (IFRC) focuses on food security, water, health and hygiene promotion, and nutrition as well as livelihoods through cash distributions.

Three thousand people in wards 13, 14 and 15 are benefiting from the programme which started in January and ends this month with the possibility of extension due to the worsening drought situation in the Lowveld.

According to the World Food Programme, an estimated 30% of the country’s population is set to be affected by drought, with communities in the southern parts of the country being the most vulnerable.

Under the water, sanitation and hygiene promotion component of the DREF, ZRCS rehabilitated 10 boreholes in the three wards.

“This is one area that is severely affected by the impacts of climate change which include high temperatures and poor rainfall,” Mandaza said.

“The intervention by Red Cross is meant to mitigate the impacts of climate change through the rehabilitation of boreholes.

“Such a community needs sustainable and safe water as well as sanitation in order to alleviate distressing impacts of extreme weather such as heatwaves, droughts and floods.”

According to BGS and WaterAid, many countries in Africa — including most parts of sub-Saharan Africa — have enough underground water to meet everyone’s daily needs.

“Going forward we expect to mechanise and install solar to power these boreholes with the hope of setting up nutrition gardens, which could help lessen the impact of climate change,” Mandaza said.

“The other aspect of DREF, the cash and voucher-based assistance, is meant to cushion the villagers and prevent them from selling their livestock for a song. You will realise that people in this part of the country don’t rely on growing crops, but on livestock.”

Marumbini village head, David Simbi pointed out that fetching water from unprotected sources such as rivers had many challenges and dangers.

“We have had cases whereby people have been attacked by wild animals or crocodiles while fetching water from Mwenezi River,” Simbi said.

“We are happy that we now have a borehole in the community thanks to Red Cross which rehabilitated it after many years.

“Our area is dry and it is known, so we appeal to the powers that be that we need sustainable water projects so that we are not subjected to the impacts of climate change.”

“In our area we are blessed because the water table is high, maybe because we are very close to a big river,” he said.

However, pump minder Ananias Ndlovu, who was tasked to rehabilitate a number of boreholes in the three wards said perennial droughts had affected the level of water
underground.

“There are few areas where water levels are high, but for the rest of the communities the water table is very low such that you can drill up to 70 metres without getting to the water table,” Ndlovu said.

“We have for many years been subjected to droughts which have caused water scarcity and stress.”

Social scientist Tapuwa O’bren Nhachi said utilising resources such as groundwater was critical in mitigating the effects of climate change.

“Point-of-use water and sanitation technologies reduce the number of deaths caused by waterborne disease, while also freeing women and girls from the work required to transport and store water, allowing them more time to focus on education and income-generating activities.

“The solution lies in new technology and boreholes can go a long way in alleviating climate change problems.”

Nhachi, however, warned that overuse might cause groundwater depletion and result in many other environmental challenges.

He said: “Climate change impacts on groundwater storage could affect the sustainability of freshwater resources.

“By contrast, the anthropogenic effects on groundwater resources are mainly due to groundwater pumping and the indirect effects of irrigation and land-use changes.”

Lawrence Mashungu, a climate change mitigation and finance expert, said a large chunk of the Zimbabwean community relied on groundwater, but there was need to have sustainable management of the commodity underground.

“The bulk of water supply in Zimbabwe is predominantly groundwater with almost all people in rural areas in relying on groundwater. About 75% of water used in Zimbabwe is underground and for groundwater, you only need to drill a borehole and obviously treat at once,” Mashungu said.

“We, however, need an approach on how to manage groundwater, in terms of water levels of abstraction and levels of harvesting that groundwater.

“As for areas like Chiredzi, even though they have droughts, we can use other methods of providing water like use of dams in areas like Mkwasine and Triangle where they draw water from Mutirikwi or Tugwi-Mukosi dams. It’s an option that needs to be explored and can be done to reach out to those areas.”

Mashungu said it was more of water management and planning that the country needed to adopt both surface and underground water.

“Under this emergency response project, we managed to rehabilitate 10 boreholes, distribute cash and non-food items such as mosquito nets, PPE and hygiene kits,” she said.

“Yes, somehow, we were mitigating the climate change challenges that the people in Chiredzi Rural face. We chose this part of the district because we understand their challenges are unique considering that they live very close to the national park.

“We understand that even if they get good rains, they cannot harvest because their crops would have been destroyed by wild animals.”

Motsiri said an appeal had been made to continue implementing the programme in Chiredzi rural.

According to the World Social Report 2021, a United Nations Department of Economic and Social Affairs flagship publication, more than three billion people live in the rural areas of developing countries.

Most survive on less than US$2 a day and depend on agriculture for their livelihoods.