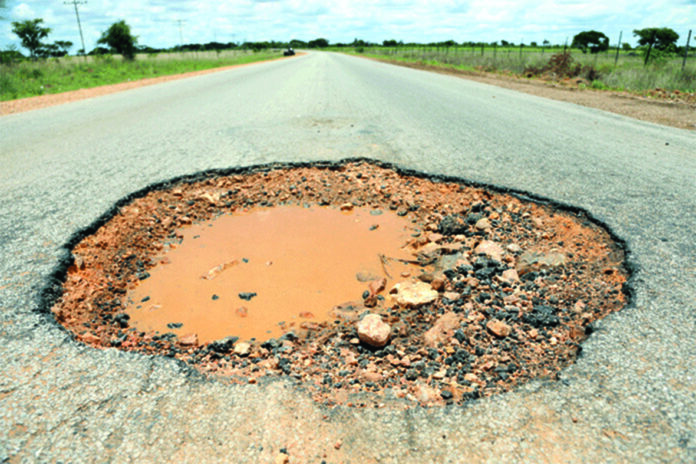 BY TAWANDA TAFIRENYIKA
DILAPIDATION of the country’s roads has reached a point where it is now difficult to get to a nearby place by road due to deep potholes.

For instance, Hwedza North constituency is so near to Harare, yet it is far due to inaccessibility because of lack of road infrastructure development.

Mushandirapamwe business centre in Hwedza is now difficult to reach. There is only a strip road to the business centre, which was built four decades ago by the colonial Rhodesian government. The strip road has outlived its lifespan.

It is very stressful for motorists to access the area. It is a risky and punishing stretch until one gets to Felsi.

Even at Felsi, the road is not at all better as one has to endure potholes for several kilometres before getting to a properly tarred road from the Shaka area to Hwedza growth point.

As the driver begins to enjoy driving on the tarred stretch, they, however, only travel about 9km before they discover that the project is actually unfinished and they begin to encounter more potholes.

It has been seven years since the road project was commissioned on the Felsi to Shaka stretch, but no meaningful progress has been made in rehabilitating the road.

Hwedza North has been an opera of numerous and endless promises by politicians. The same promises are recycled each time there is an election in the country with sustained intensity and vigour. However, an objective assessment by villagers who know their rights will indicate that the road projects in the area have been done on a snail pace, and it takes several decades for a simple road project to be completed.

Hwedzarians, as the people of Hwedza are referred to, have very bad experiences when it comes to road infrastructure development.

The project commenced when the late local businessmen Matemba and Kujeke made donations for the tarring of the road in 1996.

Government moved in to kick-start the construction of the road in 1997, but 25 years later, the project remains incomplete as the tarring is yet to reach Sadza business centre.

On every side of Hwedza growth point, there are several other road projects that seem to never end in terms of their construction. The roads have given cannon and fodder for politicians during election time as they give people false promises that the projects will be completed.

It is, however, interesting to note that some roads in Hwedza such as Zaire to Mount St Marys have been speedily completed. The Chigondo road is also progressing at a good speed, thanks to the able representation of political leadership in Hwedza South.

The road that links Hwedza growth point to Marondera is in a calamitous state to the extent that most buses have quit plying the Wedza-Marondera route. The road is so dilapidated such that people settled along the road often suffer unbearable hardships in the event they have to travel to Wedza growth point or to the provincial capital, Marondera.

Hwedza, therefore, is the only district in the whole of Mashonaland East that lacks proper road infrastructure to connect it to the provincial centre and national capitals.

It is a sad reality, and an indictment on the leadership of the constituency, both present and past. A place cannot be deemed developed when there is no meaningful road infrastructure.

Development is like water, it flows following the road infrastructure gradient.

At Mahusekwa and Sadza growth points there are towering state-of-the-art hospitals. Hwedzarians often poach for services at these institutions.

Unfortunately the poor road has been hindering them from visiting health institutions at neighbouring growth points. The Catholic-run Mt St Mary’s Hospital was never designed to cater for a huge population such as Hwedza’s.

Its archaic and limited infrastructure is often over-stretched by the northerners from Hwedza who have no healthcare facilities due to lack of commitment on the part of political representatives to lobby for construction of health facilities.

During electoral season, it is only lies that are recycled and empty promises. The promised hospital has never come.

The same lies are repeated when it comes to improving the dilapidated school infrastructure in the district, especially in resettlement communities.

Since the commencement of the land reform programme, 22 years ago, very few new schools  have been commissioned.

The colonial system was deliberately designed to inhibit access to education for the black population in the farming communities so that they remain ignorant.

Numwa Secondary School services a greater part of Hwedza North resettlements areas, which stretches to as far as wards 5 and 8 near Marondera. The future belongs to the educated, yet there is no future for most children in Hwedza North constituency.

But what has caused such shocking backwardness when it comes to basic and important infrastructure such as roads, healthcare facilities and schools?

The answer is simple that during the silly election seasons, politicians make false promises and after elections are over, people seem less fazed about commitment to these important matters.

There seem to be misguided focus on who might dish out more doughnuts, buns, beer, maize-meal and entertainment during the campaign trail.

There is no accountability on what exactly is happening with the Constituency Development Fund (CDF) as even ward councillors are kept at bay on the use of such funds.

This only happens in Hwedza North. Every constituency has a CDF committee composed of the local Member of Parliament and ward councillors.

There is, therefore, suspicion that the funds are abused by politicians to bankroll their campaign confectionery.

Hwedza North is in such a pathetic state of development, thanks to transactional politics as epitomised by votes for doughnuts, buns, and beer at the expense of quality representation on issues that matter the most.