From Patients to Doctors, Fear Rules in Zimbabwe’s Hospitals 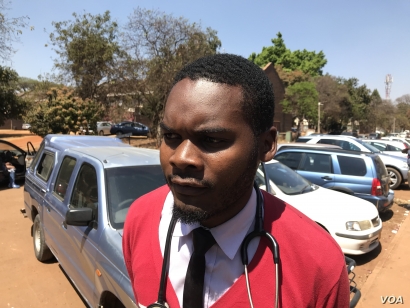 HARARE — If there is one thing that unites doctors and patients in Zimbabwe’s ailing public health system, it’s fear.

The system is struggling to function amid a shattered economy and triple-digit inflation. Administrators, doctors and patients told VOA that hospitals often have a hard time getting supplies. And government doctors say they can’t make ends meet on an average salary worth just $100 a month.

But as they have learned, speaking out has consequences.

That became evident with the sudden disappearance of Dr. Peter Magombeyi, a junior doctor who led a strike over public-sector pay. He went missing over the weekend, and colleagues say he had received threats from people he identified as being members of Zimbabwe’s Central Intelligence Organization.

A different kind of fear afflicts patients. Dorcas Nyatoti, who is 36, says she hasn’t seen a doctor in decades, and not for lack of trying. When her feet — afflicted by childhood polio — give her pain, she grits her teeth or takes over-the-counter drugs. She says that’s because every time she has approached a hospital, she’s quoted terrifying prices despite her lack of income.

“I feel pain but there’s nothing I can do,” she told VOA in her one-room apartment, which she shares with four other people, in one of Harare’s poorer areas. “Because this is the road I’m on. This is my country.”

And fear is what kept teacher Milka Gwatiringa from seeking help for more than a decade, as an abdominal tumor grew to a staggering 12 kilograms before it was successfully removed by doctors at the nation’s largest hospital.

“I had so many fears,” she said. “So I was not willing to come, I was very much afraid.”

The fear isn’t just over medical costs. Dr. Shingirai Meki, the urologist who led Gwatiringa’s surgery, says patients are scared of the uncertainty in the public hospitals.

“A lot of patients, a lot of people are suffering in their homes, they are scared, they are not sure what is going to happen to them,” he said. “So she [Gwatiringa] is a wonderful success story which we wish everyone to be aware.”

VOA met with Magombeyi, the strike leader, last week before he went missing. At the time, he was blunt about Zimbabwe’s challenges — and his own.

“I love Zimbabwe, and my colleagues would agree with me, that they also love Zimbabwe,” he said. “We love our country, it’s beautiful. However, it doesn’t negate the fact that when the economy is deteriorating like this, we are forced to think outside the box.”

Two days later, he was gone. Fellow doctors have marched in Harare this week, demanding his return.