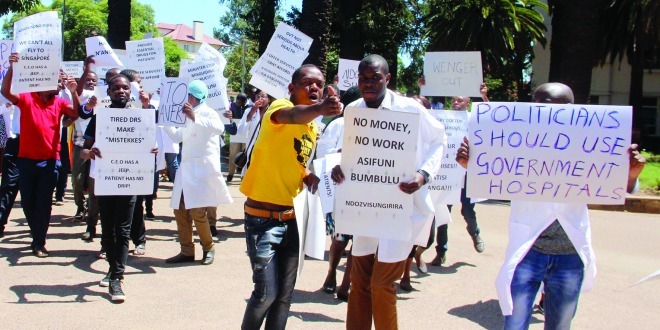 THE Zimbabwe Christian Alliance (ZCA) says the ongoing strike by medical doctors is a golden opportunity for government to prove its commitment to transforming the country and meeting the needs of ordinary citizens.

The ZCA, in statement yesterday said it was concerned about the deadlock between the Health ministry and doctors at public hospitals.

“The strike enters the fourth week and reports of deaths and injured patients suffering have been released. The strike by the doctors is a cry for a permanent solution to address the decaying health sector,” part of the ZCA statement read.

“This strike presents a golden opportunity for the new administration to prove to the Zimbabwean population that it is serious about the transformation of the country and meeting the needs of ordinary citizens.”

ZCA said the government should see this strike not as a crisis, but an opportunity to “start the process of transformation of the health sector so as to be on the same level with what is being offered by other Sadc countries who improved their services to international level”.

The strike has, however, paralysed most public hospitals across the country.

The government, through the Health Services Board, offered a deal that the health personnel have scoffed at. The stalemate, however, has resulted in more suffering for the patients.

“We can no longer continue with this deadly impasse and the government should set this Easter week to resolve this important issue,” the statement read.

“We call upon President Emmerson Mnangagwa and Health and Child Care minister David Parirenyatwa to intervene and come up with a permanent solution to this problem,” it said.