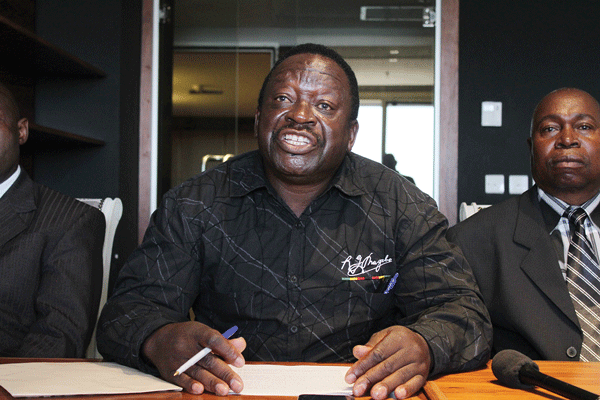 WAR veterans have threatened to join hands with opposition parties in a fresh onslaught aimed at pushing out “captured” President Robert Mugabe from power in next year’s general elections.

“Practically, she is a self-proclaimed executive Vice-President, because she delivered a verdict on (Zanu PF political commissar, Saviour) Kasukuwere at a rally and cleared (Higher Education minister) Jonathan Moyo of Zimdef (Zimbabwe Manpower Development Fund) fraud,” he said.

“These are issues that were referred to the presidium.

“If she is not part of the presidium, then that is what you can call State capture.”

Some Zanu PF provinces accused Kasukuwere of plotting to unseat Mugabe and the matter was referred to the Zanu PF presidium, which is yet to make a decision, although both Grace and the President appeared to absolve him of any wrongdoing.

On the other hand, Moyo has a pending legal matter, where he is accused of defrauding Zimdef.

Matemadanda was speaking after Mugabe’s rally in Chinhoyi on Saturday, where Grace upbraided Information ministry secretary, George Charamba for overstepping his mandate.

He said the time has come for former fighters, long perceived as Mugabe’s foot soldiers, to build bridges with opposition parties and push out the Zanu PF regime.

“Zanu PF has been so patronised to the extent that people cannot look for solutions from the party,” Matemadanda said.

“We have to make sure that he is out of power in 2018 as a collective.

“Unfortunately, we have been too polarised to the point that we are forgetting that (MDC-T president, Morgan) Tsvangirai, Joice Mujuru (National People’s Party) or Welshman Ncube (MDC) are not the enemies.

“The enemy is poverty, unemployment and Mugabe, who wants to die with Zimbabwe.”

The war veterans’ call for a combined onslaught on Mugabe come as there is a perceived renewed attack on Mnangagwa, who is their favoured candidate to replace the President.

This comes as opposition parties are on the verge of inking a pact to sponsor a single candidate to challenge Mugabe in next year’s presidential race.

“Mugabe has totally and completely lost touch and relevance. It’s now a Grace show. What a tragedy?” he
said.