HIV-related prosecutions to be guided by best scientific evidence 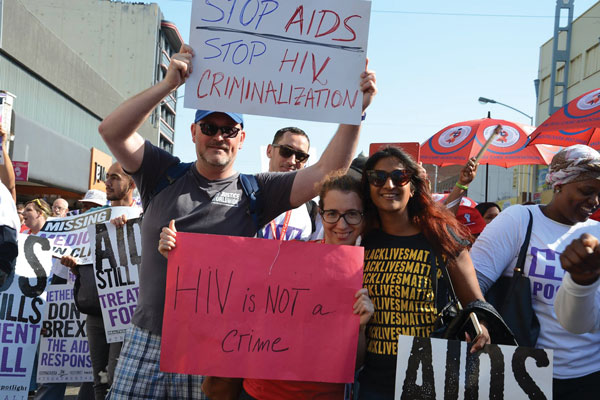 ZIMBABWE is one of the countries in the world that criminalises the wilful and deliberate transmission of HIV, but most prosecutions and convictions are considered unjust as they are not guided by the best scientific and medical evidence.

There are widespread concerns that most persons charged with wilful or deliberate transmission of HIV provided for under the Criminal Law (Codification and Reform) Act, are either wrongly convicted or prosecuted, due to lack of the best machineries and in-depth knowledge of the disease and the science of transmission by prosecutors.

Scientists have recommended that caution be exercised when considering prosecution and encouraged government and those working in legal and judicial systems to pay close attention to significant advances in HIV science over the last three decades, to ensure current scientific knowledge informs application of the law in cases related to the condition.

They argue that in convicting a suspect, the court must prove beyond doubt that there was a possibility of transmission. HIV is not easily transmitted from one person to another, but it is a relatively fragile virus that is transmitted through specific well-described routes.

International guidance on HIV in the context of the criminal law recommends that proof of causation in relation to HIV transmission should always be based on evidence derived from a number of relevant sources, including medical records, rigorous scientific methods and sexual history.

In most HIV-related cases, Zimbabwean courts only use medical records obtained from a clinic or hospital and those records can provide contextual information, but cannot establish transmission between a complainant and accused person.

Liberty Gono, a lawyer who once represented an accused person who was facing a charge of wilful or deliberate transmission of HIV, said the courts have been forced to work with the little evidence they have and said this often prejudiced the accused person if convicted.

“The circumstances of the nature of sexual relationships or other potential sources of a person’s HIV infection must be central to any case where sexual transmission of the disease is alleged. There must be lawfully obtained, medical records that identify the last HIV-negative person and the first HIV-positive test of the complainant and the accused person,” Gono said.

“There is need for the State to have all documents necessary to acquire the conviction of an accused, but what we witness is only a medical report which can only establish the condition of the complainant at that moment, but not history which can show regular visits to the clinic for the tests.”

HIV and Aids activists have blamed the criminalisation of the disease, saying convictions of people alleged to have deliberately transmitted the disease could also stifle the fight against stigmatisation and disclosures.

Network for People Living with HIV chairperson, Tendai Westerhof, said current laws make it very difficult for individuals to disclose their HIV status to their partners.

“These laws on HIV make it difficult for individuals to disclose their status to their partners. Disclosure helps in getting support for the infected and also facilitating treatment for partners who may not know their status,” Westerhof said.

“Criminalisation under the current laws is retrogressive as it discourages individuals seeking or facilitating treatment for their partners. People who brought the disease home will fear taking their medications in public fearing their partners will report them to police and they will end up taking their medication in private for fear of the law. This will put the other partner or spouse at great health risk as they would not know their status to seek for treatment and care.”

In 2015, the law criminalising the transmission of HIV came under the spotlight when the Constitutional Court heard an application filed by a Bulawayo woman challenging its constitutionality.

The woman was convicted of wilfully transmitting the virus to her then spouse by a Bulawayo court before the Zimbabwe Lawyers for Human Rights (ZLHR) took up the case to challenge both the conviction and sentence.

While challenging the constitutional validity of the Criminal Law Act, ZLHR lawyer, David Hofisi said the provision of the Act was “too wide, dangerous, and unlawful” and thereby infringing on the applicant’s right to protection of the law.

Hofisi said the Criminal Law Act infringed on the applicant’s fundamental right not to be discriminated on any basis including HIV status as enshrined in the Constitution.

However, on the other hand the laws also act as a shield against rapists. In 2016, a Mbare man, Rassel Malenga who admitted raping and infecting a 16-year-old girl with HIV, was sentenced to 20 years in prison by Harare magistrate Fadzai Mtombeni.

While defending her judgment in court, Mtombeni said Malenga appreciated that what he did was wrong and the offence was aggravated by the fact that he infected an innocent girl with HIV.

However, there are other convicts who admitted in courts of justice that they are HIV positive and they must be assisted by the courts through scientific and medical evidence to prove that they, indeed, infected the victim.