A group of mostly elderly mourners on their way to a funeral were aboard the Toyota Granvia that collided head-on with a Toyota Wish, killing 20 people on Monday along the Masvingo-Zvishavane highway.

The Toyota Granvia was heading west towards Zvishavane while the Toyota Wish was going east towards Masvingo when the Granvia burst a tyre and encroached into the opposite lane colliding with the oncoming Toyota Wish.

Police were by yesterday still unable to tell the exact number of passengers and crew in the two vehicles.

As police started going through the wreckage they recovered a burial order in the Granvia issued at the Gwanda District Registry on Sunday for Loice Zvidzai of Old Police Camp in Gwanda.

Police could only confirm that the Granvia was on its way to a funeral and while it was possible this was that for Ms Zvidzai, police had no confirmation of whose funeral the mourners were travelling to. Police commanders from Masvingo led by Assistant Commissioners Florence Marume and Fredrick Mbemgwa were at the crash site yesterday as their teams continued recovering the remains and the wreckage. 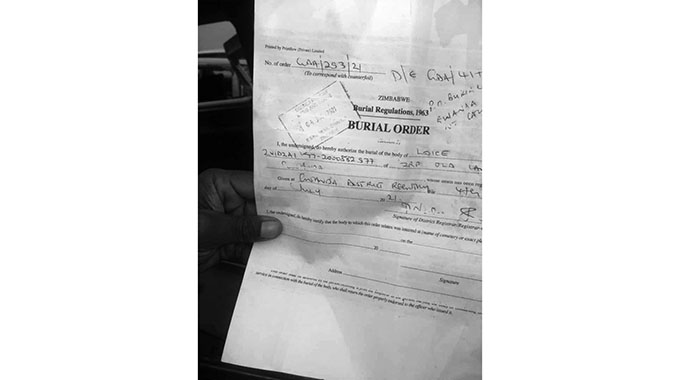 Villagers from Jodias and others in the area who spoke at the crash scene said the Toyota Wish was notorious for speeding along the Masvingo-Zvishavane road, and was a well-known presumed pirate taxi on the route.

Among the dead in the Wish was a police officer based at Buchwa Police Station, Lincoln Muungani (28), the only son in his family.

His father and sister were at the scene yesterday afternoon, struggling to come to terms with his sudden death.

Jeffrey Paringira (33) of Jodias Village in Madamombe, who was the first to arrive with his brother Simbarashe Kuzipa, said they started running to the highway when they heard two loud bangs.

“It was around 3.30pm when we heard two loud bangs and when we rushed to the road to investigate, we discovered there was an accident involving two vehicles: a Granvia, which had passengers who appeared to be elderly people said to be going to a funeral, and a Toyota Wish that was going towards Masvingo.

“We noticed that most people had already died in the two cars, but we managed to pull out a police officer (Lincoln Muungani) from the Toyota Wish and he was still breathing though faintly.”

Lincoln unfortunately died at Zvishavane District Hospital around 6pm on the same day.

Another villager among the first to arrive at the accident, William Matangamberi, said he had never seen anything like that in his life.

“We noticed that the Granvia had burst one of its tyres and the driver lost control of the vehicle and encroached to the opposite lane where the Toyota Wish was coming,” he said.

Lincoln’s father, Mr Xavier Muungani (64) of Bulawayo, came with one of Lincoln’s sisters, Ms Noreen Willie and other relatives.

“I received the message of my only son’s passing on around 8pm and by then it was already late so we decided to travel to Zvishavane mortuary today to collect his body. I checked his body. It was badly injured and covered in blood.

“It seemed the impact of the crash was too much because the body had deep cuts while some of the ribs were broken. My son surely died a very painful death and I am devastated,” said Mr Muungani.

“Police commanders decided to visit the crash site so that we can see for ourselves the situation on the ground and this is part of investigations which are ongoing. At the moment we only know that the Toyota Granvia burst one of its tyres but investigations are continuing,” said Inspector Dhewa.