How ED and the Scarf became inseparable President Mnangagwa in his trademark scarf

Phyllis Kachere Deputy News Editor
As my friend Robert Mukondiwa aptly puts it; since the turn of the century and even as early as the advent of Independence, Zimbabwe has been battling to define a culture that makes its mark on the world. “Something either produced, or perfected by Zimbabweans, that can be regarded as Zimbabwean first and belonging to the world later,” he said as we laughed after news that Zimbabwe had topped the world in condom usage! 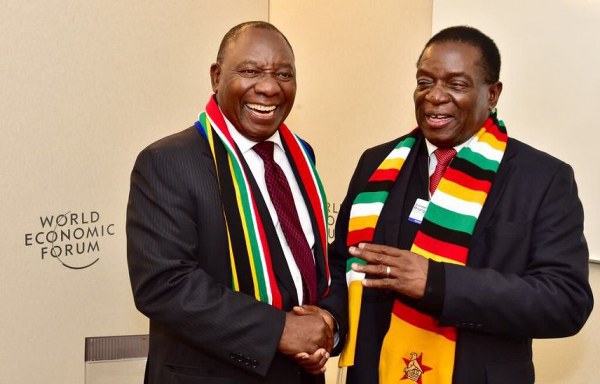 Our discussion was whether the condom had become the national artefact as almost everybody used.
“A national apparel would be something that is not necessarily unique to Zimbabwe, but defines a certain aspect of their culture. And as culture is dynamic, even a modern-day cap can be used to define a culture, which is why it is at the centre of hip-hop culture in America,” Professor Joel White, a witty American immigrant who hit Zimbabwe’s frontiers in the early seventies and stayed, had told us.

Previously in 2005, the then Education, Sports and Culture Minister Aeneas Chigwedere had tried, with dismal failure, to launch what he said would be Zimbabwe’s national dress fabric!

Enter the Scarf!
First spotted in Davos, Switzerland, in January during the World Economic Forum adorned by Zimbabwe’s President Emmerson Mnangagwa, The Scarf has literally become “one” with the country’s Commander-in-Chief.
He had it on again when he attended the African Union Summit in Addis Ababa, Ethiopia, soon after Davos.

President Mnangagwa wore The Scarf with pride when he was a panellist at the African Continent Free Trade Area (AfcFTA) Business Forum where he enunciated the “Zimbabwe is Open for Business” mantra in March in Kigali, Rwanda.

He was to be spotted again on the international scene in Abidjan, Cote d’Ivoire, where he attended the sixth edition of the Africa CEOs Forum towards the end of last month.

Earlier on in March, he had worn The Scarf under a sweltering sun as he toured the $259 million Kazungula rail and road bridge. 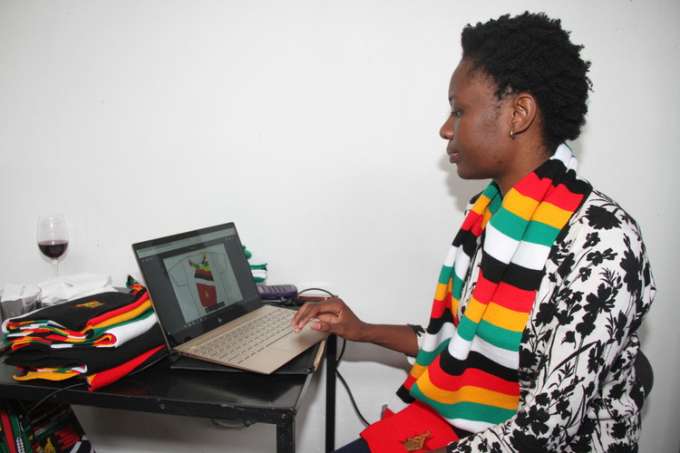 Celia Rukato, the creator of the now famous scarf

Has The Scarf become the Holy Grail in Zimbabwe’s cultural Odessy? What does The Scarf mean to the First Citizen of Zimbabwe? The jury is still out, but for President Mnangagwa, he has become one with The Scarf .

“I have just come from my rural area. That’s why I don’t have my scarf. I have it in my office but I was hurried out of my office by the officers. I should have brought it. We are one! This is the flag, I am proud of my country, whether it has sanctions or no sanctions.

“Whether it is poor or rich, I still feel proud that this is the flag. This is the flag which unites the people of Zimbabwe, this is our national anthem,” he explains to a journalist during an interview with China Central Television (CCTV).

He had arrived at the venue of the interview minus The Scarf and the journalist, Xu He, of CCTV, remarked that he had left his trademark!

The Scarf, in Zimbabwe’s flag colours, has become a part of President Mnangagwa’s apparel as he has worn it even in the scorching heat of tropical Africa.

Could this scarf, the creation of young entrepreneur, one Celia Rukato’s Chjaa Enterprises (Private) Limited, be the Holy Grail – the national dress – Zimbabweans have yearned over the years?

“If you are to search for a national dress, you need not look for something necessarily unique to Zimbabwe, but rather uniquely embraced by a sizeable number of people in the community,” Prof White had quipped.

“The Scarf has generated interest from citizens seeking to identify with their leader and country. Just as I was packing your complimentary scarf in the car as I came for this interview, a stranger knocked on the window and pointed to the scarf.

“I am travelling to Austria tomorrow and I want to have this scarf. I am looking for it, may I please have it,” Celia told this reporter as she sat for the interview.

The Scarf has become a hit with mostly Zimbabweans in the Diaspora and this has resulted in Chjaa getting the biggest orders for The Scarf from the Diaspora.

She said Chjaa was a word she made up, that is an expression of excitement and joy.
The idea for the Scarf and some fabrics, Celia says, came in 2014 as an experiment to capture the culture and identity of Zimbabwe, inspired by the Great Zimbabwe in Masvingo, and Khami Monuments in Bulawayo.

The Scarf was sold at a shop at the airport and tourists used to buy it as a souvenir after visiting the country.
She said after she heard about preparations for the World Economic Forum in Davos, she kept wondering what Zimbabwe, represented by President Mnangagwa, could take there as a gift from the people of Zimbabwe.

“I kept wondering, what could the President take to other world leaders in Davos? We packed some scarves and doeks which we hoped could be given out as gifts or could be worn by the Zimbabwean delegation. We delivered the package to the Foreign Affairs Ministry and funny enough, the scarves were the last 30 in our stock,” said Celia.

Locally, the Scarf sells for a miserly $12!
Little did she know that her creation would travel the world, adorned by Zimbabwe’s First Citizen.
“I was fretting over the power outage that had hit the factory many times that day when the manager asked me, have you seen the picture? The President is wearing our scarf, the picture is on Twitter. I jumped with joy as I searched for the picture that introduced our scarf and the President to the world at Davos!”

The power outage-induced stress immediately vanished!
He wore it on day one, the next day he had it. Day three, he was still wearing the scarf!
The story of The Scarf has not been all rosy.

Critics have charged that Celia’s scarf has destroyed the flag because she has distorted the sequence of the colours of the flag.
“Why are the lines horizontal? Why are the colours not in sequence? And we have said the scarf is not the flag. If you want the sequence of the flag, you can make your own scarf. If you are so keen on the flag, just take the flag and wear it. Allow people to celebrate being Zimbabwean in a different way!” she retorted.

Because Chjaa Enterprises had outsourced production of The Scarf and their other products, legal problems arose forcing Celia to seek legal recourse as those she had hired to produce The Scarf had become dodgy, producing and selling her creation illegally.

That has resulted in unmet orders or delays in fulfilling orders as the dodgy manufacturers sought to fulfil their illegal supplies first.

The ultimate was going the legal route; terminating the production contract and setting up a factory to produce The Scarf in-house, further delaying surging orders.

The multi-tier pricing system that dominates Zimbabwe’s informal traders has also put a damper to The Scarf’s production.
“We charge a flat $12 for The Scarf, whether it’s swipe, mobile transfers, bond notes or US dollars. But when we procure raw material for its production, we have to contend with multi-tiered pricing. Sometimes the knitting yarn is just not available,” said Celia.

And Karina Textiles, who also used to produce knitting yarn, a raw material in the production of The Scarf, have also gone under.

While Chjaa has struggled to meet surging orders, Celia says she has come up with an innovative public private partnership whose details she said she would release soon.

While President Mnangagwa has emphasised on the “Zimbabwe is Open for Business” mantra, Chjaa Enterprises say they have embraced the idea in totality.