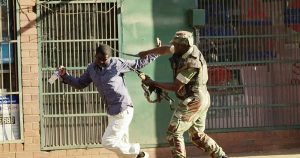 Post Election Violence Monitoring Report
Following the July 30 elections, Zimbabwe plunged into post-election violence with the  state agents as the main perpetrators.  On 15 August 2018, the Zimbabwe Human Rights NGO Forum published the first Post-Election Violence Monitoring Report documenting 199 violations including extra-judicial killings, abductions, threats and assaults.  The full report is available here. After the publishing of the report, more cases where received.  A follow up report will be published shortly.

Forum Engages Stakeholders Regarding the Human Rights Situation
After several victims who had been attacked by state security agents in the aftermath of the 30 July elections, the Forum has approached a number of key actors in seeking to push the state to halt human rights abuses.  The Forum met with diplomatic missions from around the world including the European Union, foreign observer missions, African Diplomatic missions as well as the Zimbabwe Human Rights Commission (ZHRC) and presented the first Post-Election Violence Monitoring Report for 2018.  In presenting the report to the African Diplomatic Missions, the Forum’s Chairperson Ms. Jestina Mukoko stated that it was critical for African government to speak out against the violations and initiate an engagement process to bring Zimbabwe back to normalcy.  See the communication to the African diplomatic community here. In her address to the ZHRC, Ms. Mukoko noted that the evidence that the violence was being perpetrated by the state was overwhelming.

Foreign Observer Missions Raise Alarm on Election Related Human Rights Violations
A number of foreign observer missions have released their preliminary reports.  The European Union noted that the playing field was not level, highlighting bias of the public broadcaster in favour of ZANU PF, intimidation of rural voters and the high number of assisted voters. See the Preliminary Statement here. The Commonwealth Observer mission noted the unequal coverage of political parties by the public broadcaster.  The full report of the mission is available here. Following the 1 August 2018 killing of 6 civilians by the military, the international election observer missions issued a statement condemning the excessive use of force by the military.  The full statement is available here.

Election Disputes
Zimbabwe has failed to make a break with the legacy of contested elections as the 2018 election are again contested.  Following the announcement of elections by the Zimbabwe Electoral Commission (ZEC), the main opposition MDC Alliance has accused ZEC of announcing fake results.  See the link herefor the election petition by MDC Alliance Presidential Candidate Nelson Chamisa.  There are also election petitions challenging the results in 21 Parliamentary Constituencies and 5 Council Wards.

Assistance to Victims
Forum members and Secretariat have in the past week assisted many victims of organized violence and torture.  The ZLHR has represented a total of 35 human rights defenders arrested and charged with committing public violence, breaching immigration and the electoral act.  The Counseling Services Unit attended to 108 survivors. The Public Interest Unit of the Forum is providing legal assistance to victims of the post-election violence to enable them seek redress and demand accountability.   Forum reaction team undertook verification missions to Mutoko and Chitungwiza. See alert from Mutoko hereand Chitungwiza here.