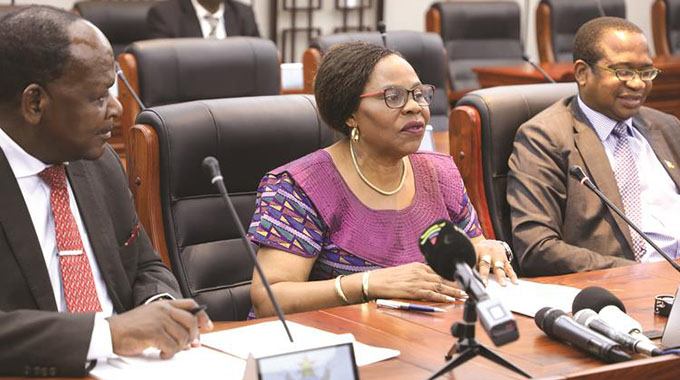 ZIMBABWE’S RESPONSE TO THE COVID-19 PANDEMIC AND REPORT ON THE PROCUREMENT AND ROLLOUT OF VACCINES
Cabinet received an update on the country‘s response to the Covid-19 pandemic  presented by the Vice President and Minister of Health and Child Care, Honourable, Dr. C.G.D.N. Chiwenga.

Regarding case management, infection prevention and control, the number of people in need of hospitalisation for Covid-19 decreased, with the country’s bed occupancy rate receding from 1.5% during last week to 0.9% this week.

The nation is also being advised to remain vigilant as winter is fast approaching and the country readies for the Easter and Independence Day holidays. Accordingly, all citizens are urged to continue adhering to the laid down World Health Organisation protocols at all times.

Cabinet wishes to inform the public that preparations for the 2022 Population and Housing Census are on track, with Levels 1 and 2 training having been completed in March 2022. Cabinet highlights that the bulk of the personnel is drawn from the teaching fraternity, youth and other civil servants from the security sector.

To avoid collective or institutional households, Cabinet advises the nation that all institutions of higher learning will be closed from 18 to 30 April, 2022. Closure of the institutions will pave the way for the enumeration of students in their usual households. Church members are similarly encouraged to be at their places of residence between 18 and 30 April to allow the smooth conduct of the census.

Preparations for the 42nd Independence Anniversary Celebrations which will be held under the theme “ZIM@42: LEAVING NO ONE AND NO PLACE BEHIND” on 18 April, are at an advanced stage.  The Celebrations will commence on 16 April, 2022 with the lighting of the Independence Flame at Khami National Monument. The Independence Torch lighting ceremony which will be officiated by the Minister of State for Provincial Affairs and Devolution will be punctuated by arts and cultural acts from the region. The function will also be attended by some Cabinet Ministers.

The nation is advised that implementation of NDS1 has largely been successful despite the adverse effects of the COVID-19 and the exchange rate induced inflationary pressures in the economy.   The second half-year performance report highlights the progress registered by all the 14 National Priorities.

Cabinet considered and adopted the Monitoring and Evaluation Framework of the National Development Strategy 1 (NDS1) for 2022 as presented by the Minister of Finance and Economic Development, Hon. Prof. M. Ncube.

The nation is advised that on 24 May 2021 Cabinet made a decision that some of the key Performance Indicators were not frequent enough to enable effective and regular monitoring and evaluation of the National Development Strategy 1 (NDS1) implementation process. Following consultations within the Thematic Working Groups and with the support from Cooperating Partners, a comprehensive Key Performance Indicators review was undertaken, resulting in an updated Monitoring and Evaluation Framework of the National Development Strategy 1 (NDS1).

Key among the new KPIs under the Economic Growth and Stability Pillar are the following: the quarterly money targets and money exchange movement rate; the ratio of wage bill to revenues and the ratio of banked adults as a percentage of the total adult population.

Under the Food and Nutrition Security Pillar, an indicator on food secure people (disaggregated by rural or urban) was introduced to measure the outcome of improved food security.

Under the Infrastructure and Utilities, new KPIs were introduced which met the quarterly reporting frequency criteria. In this regard, in order to generate standard data comparable to global and regional reports, the Thematic Working Group added a KPI on Zimbabwe’s ranking in overall infrastructure out of 137 countries, which is published annually by the African Development Bank. However, under the Devolution Work programme, there are designs to construct local Provincial and a National Infrastructure Index.

To measure the national Outcome of Improved Access to Affordable Quality Housing and Social Amenities, two KPIs, namely number of housing units and percentage changes of households with access to social amenities were replaced by four new indicators. A new national Outcome, Improved Wetland Area Under Protection was introduced and it has one KPI, namely area of wetlands freed from settlements (ha), expressed as a percentage of designated wetlands.

The Youth, Sport, and Culture Thematic Working Group revised the 2022 Monitoring and Evaluation Framework by introducing new KPIs to measure social cohesion, as expressed in terms of increases in the levels of participation in arts, culture, sport and recreation festivals.

The 2022 M&E framework indicators were also improved by ensuring that specific proxies were identified to approximate poverty datum levels reductions. Other new improved indicators include number of beneficiaries covered by food assistance disaggregated by sex, disability, child-headed household and the number of beneficiaries covered by Harmonised Social Cash Transfers (HSCT), amongst others.

The Nation is advised that to ensure synchronisation of reporting with the Mid-Term Fiscal Review and Mid-Term Monetary Policy Statement, Review Reports to Cabinet will be made bi-annually and published in the interest of transparency and accountability. The Thematic Working Groups will continue to submit their NDS1 Quarterly Progress Reports to the Tripartite for administrative purposes.