In The Midst Of Economic Challenges, Zimbabwe Finds A New Ally In The UAE

Source: In The Midst Of Economic Challenges, Zimbabwe Finds A New Ally In The UAE: A Q&A With Zachary Smith 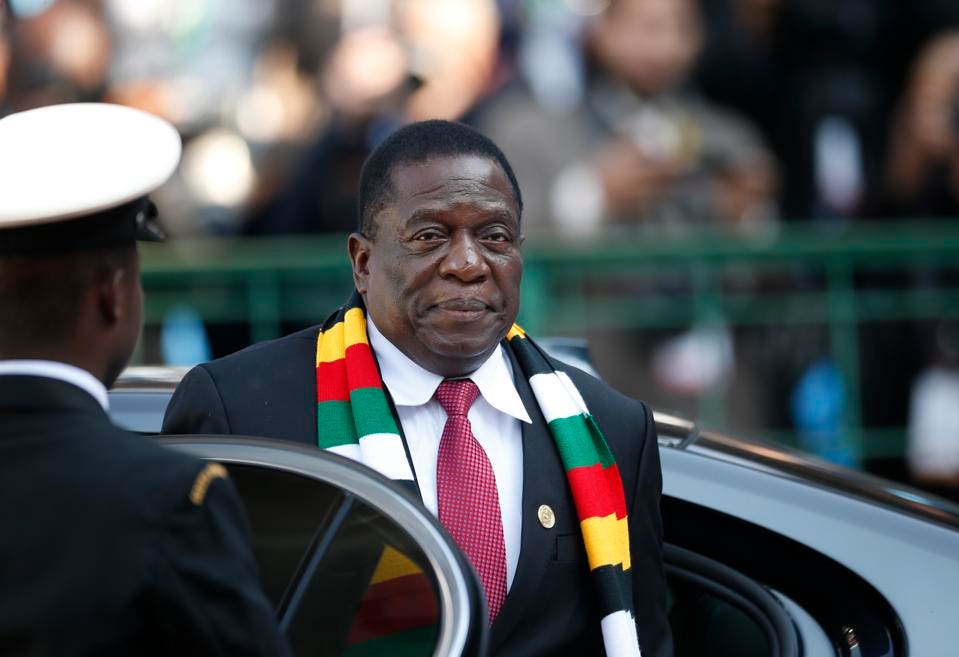 Zimbabwe’s President Emmerson Mnangagwa looks on as he arrives ahead of the inauguration of incumbent South African President on May 25, 2019 at Loftus Versveld stadium in Pretoria. (Photo by SIPHIWE SIBEKO / POOL / AFP) (Photo credit should read SIPHIWE SIBEKO/AFP/Getty Images)

Zimbabwe is going through an unbelievable socio-economic crisis and is slowly reaching a tipping level. With skyrocketing inflation, a biting Forex crunch and failing institutions among the myriad issues the leadership of President Emmerson Mnangagwa is grappling with, many investors are scrambling for safety. And yet, the United Arab Emirates is making bold overtures to invest in the country’s economy and is exploring new areas of partnership with the Southern African country.

Last December, Sheikh Khalifa bin Zayed Al Nahyan, the President of the UAE, issued a decree to establish an Embassy for the UAE in Zimbabwe. The UAE-government has also donated millions of dollars worth of medical equipment to the country and delegations of prominent businessmen from the Arab emirate have been visiting Zimbabwe recently to explore opportunities there.

Zachary Campbell Smith, a Washington D.C.-based, Emerging Market geopolitical analyst has long documented African investment opportunities and in association with Senior Fellows at the Arcadia Foundation, Zimbabwe opportunities and challenges. I recently caught up with him in New York where we discussed the co-operation between the United Arab Emirates (UAE) and Zimbabwe’s new, struggling government.

MN: For decades, while under the rule of former President Mugabe, the Republic of Zimbabwe suffered tremendous socioeconomic challenge. Freedoms were stifled, heavy taxation on foreign integration coupled with indigenization policies drove away foreign investment; over the course of years, each election to potentially bring about change to this set of circumstances drew controversial results, keeping his ZANU-PF Party in control. However, you’ve since been following the administration of President Mnangagwa and in particular, his promotion to the world that under his leadership, Zimbabwe is once again open for business.  The President is a long-time member of the ZANU-PF. In your opinion, can we expect more of the same or is there real potential for the President’s developmental agenda to bear fruit?

ZS: There’s no question that the international community needs to take a fresh look at the Republic of Zimbabwe. Unlike Robert Mugabe, President Mnangagwa has dedicated his Presidency to redefining ‘business as usual’ in the Sub Saharan African potential economic power player and has been making his rounds internationally to incentivize trade and investment with Zimbabwe. A few intrepid nations such as the UAE have taken note of this tangible difference in leadership, the openness of his Administration to accept the realities of the Republic’s geopolitical situation, his work to rehabilitate the quality of life for Zimbabwean people (putting Party politics aside) while at the same time, acknowledging the Administration’s renewed drive to leverage the nation’s vast natural resources and trade potential that have drawn attention historically.

MN: What are some of the key factors that have influenced the strengthening of bilateral ties between the UAE and Zimbabwe?

ZS: The UAE is clearly setting a milestone in global investment in Africa for others to follow. The strengthening of bilateral ties can, in part, be credited to the economic liberalization policies and policy implementation efficacy of the new Administration of Zimbabwe President Emmerson Mnangagwa. The Zimbabwe I see today has rapidly reversed from the indigenization act and longstanding overregulation and financial mismanagement when Zimbabwe’s government overstretched its roles in key economic sectors and created conditions which stifled foreign investment and integration. This hindered their own prospects for mutually beneficial global partnerships and stifled growth.

MN: Can you share some more details with our readers on how this cooperation with the UAE is shaping up?

ZS: Looking at the big picture, there is a myriad of activity right now that should raise eyebrows. Firstly, the UAE is clearly looking for ways they can apply technology and social development to be of immediate use to the Zimbabwean people. They take health care very seriously, and that’s why they recently contributed $2 million in equipment and medicines to Zimbabwe’s National Pharmaceutical Company, NatPharm, with an eye on working together even more directly to open a production facility in-country.

Second and perhaps, as I mentioned, one of the reasons that we find the UAE investing in such a major way in the future potential of this country is due to Zimbabwe’s drive to privatize a huge number of assets. Zimbabwe is making great strides to reduce its budget deficit from 12% to 5% of its GDP, cut bureaucratic red tape and concurrently encourage foreign direct investment (FDI). To accomplish these initiatives, they have recently been privatizing once-nationalized institutions, such as the country’s two main telephone and internet operators, TelOne and NetOne.

Zimbabwe is creating a more conducive climate for open investment and the UAE, quite frankly, have the versatility and political stability to quickly and effectively take them up on the opportunity.

ZS: The UAE is really demonstrating to the government of Zimbabwe and its people what their capacities are and also where their values lie. When the two work in concert, they can achieve great things. The UAE are a major player in global commerce and in step with their 2017-2021 African Investment Agenda, they clearly see tremendous opportunity in working together with Zimbabwean companies. That means building a healthy relationship that works both ways. In 2017, Zimbabwe registered a $307.6 million trade surplus with the UAE. The business interests of companies from the UAE run the gamut, from information technology to minerals, renewable energy, and – importantly – agriculture, tourism and health. Let me emphasize the fact that the UAE really envisions an opportunity for Zimbabwe to once again become the “breadbasket of Africa” with the right investment and the right technology.

MN: It sounds like you’re envisioning the concept of their economies growing together – quite literally?

MN: How has the UAE’s relationship with the relatively new Government of President Emmerson Mnangagwa been so far, in your view?

ZS: I’m told (and can endorse) that the UAE have noticed a tangible difference in the kind of synergetic relations they’ve built with President Emmerson Mnangagwa and everyone in his Administration to date. There’s a new energy in Harare, and a real commitment to more deeply integrate Zimbabwe with key players in the global economy. This comes from the new Government’s visible desire to accelerate the pace of economic improvement in Zimbabwe, and to us, that’s a very good sign. The signing of Double Taxation and Bilateral Investment Protection Agreements has also been instrumental in lifting the bilateral relationship with the UAE.

MN: Is there anything on the horizon you can forecast?

ZS: Expect more cross-sector investment. I don’t want to sound overly optimistic as there are still real challenges in the country, but there is a good reason to believe that we will see a doubling, if not tripling of the kind of investment launched by UAE in the very near future. The world should receive the message loud and clear that Zimbabwe is open for business again.