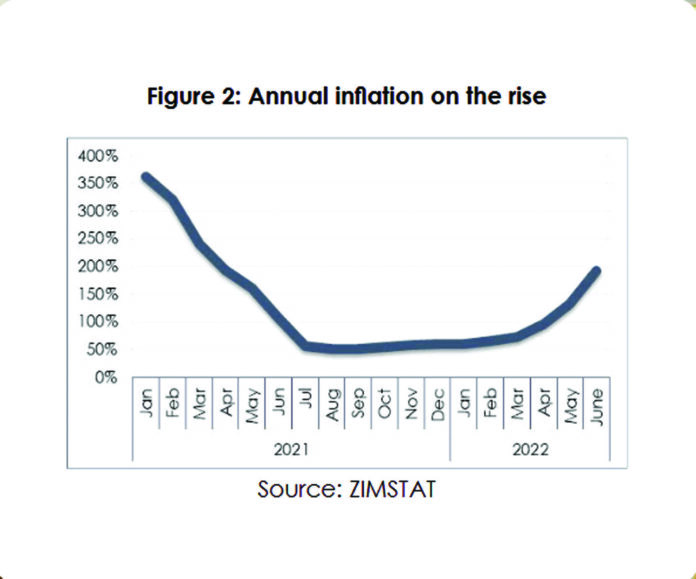 BY SHAME MAKOSHORI
Inroads achieved during Zimbabwe’s battles to arrest an inflationary charge have been “wiped out” due to policy failures and the country could be headed towards a “catastrophic” outturn, the Confederation of Zimbabwe Industries (CZI) warned yesterday.

In a brief to members titled June 2022 Inflation and Currency Developments Update, Zimbabwe’s biggest industrial lobby said markets had been thrown off balance by rocketing month-on-month inflation, which this month charged towards a record 35% last seen in July 2020.

This was the highest ever such rate since dollarisation in 2009

“The month-on-month inflation rate for June 2022 raced to 30,7% from 21% in May 2022,” the CZI said, warning that recent ad hoc measures announced by firefighting authorities fell far short of the push required to cool off market jitters and rebuild the bleeding economy.

In May, President Emmerson Mnangagwa announced a series of measures including directing banks to stop lending.

But as markets revolted, government somersaulted and reverted to the status quo, legalising the use of the United States dollar and replaying experiences of the hyperinflation era, which was characterised with policy shifts and reversals.

These ended up frustrating investors after a string of corporate bankruptcies. Back in 2008, hyperinflation hit the 500 billion percent mark and knocked out the Zimbabwe dollar.

Yesterday, the CZI warned that the possibility of another relapse into the hyperinflationary scourge were high.

However, the lobby still hoped authorities would rise up to defend the haemorrhaging currency.

The domestic currency has been extensively battered on both the official and black markets, where it was trading at US$1:$800 yesterday.

“The sharp increase in inflation shows that the measures announced so far, including the recent policy measures of May 2022, did not manage to dampen the inflation trajectory. If the current trajectory is maintained, Zimbabwe will be headed towards hyperinflation, which will be catastrophic for the country,” it said.

“This means that month-on-month inflation is only about five percentage points away from breaching this record level, underlining that all the gains that were made in 2021 have already been wiped away.”