The state media is ratcheting up its spin on the targeted sanctions situation in Zimbabwe, blaming the measures for everything from hyperinflation to the cholera epidemic.

ZANU PF has for years been using the presence of the restrictive measures, targeted specifically against Robert Mugabe and members of his regime, as the scapegoat for the country’s numerous problems. And in the wake of the party’s electoral ‘win’ in last month’s polls, the rhetoric about the measures and the so-called damage they have done, has increased.

The Herald newspaper has been leading the spin campaign, publishing an article on Tuesday that voiced support for Mugabe’s threats to seek retribution for the sanctions. Speaking at a funeral on Sunday, Mugabe threatened ‘tit-for-tat’ against US and British companies in Zim, because of the sanctions still in place. 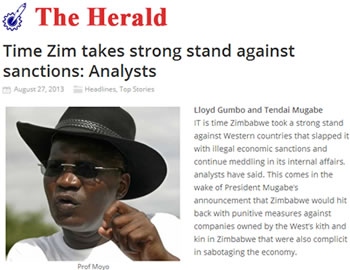 The Herald turned to ZANU PF’s pet ‘analyst’, Jonathan Moyo, for ‘expert’ opinion on the sanctions issues, who told the newspaper that ‘tit-for-ta’ was a “well-established diplomatic principle in international relations.”

“The illegal sanctions imposed on Zimbabwe by Britain and her allies are against the principle of mutual benefit and they are based on the false notion that international relations are one way traffic when in fact it is two way traffic. You scratch my back and I will scratch yours. If they slap sanctions on us, it is rational for us to respond in the same currency,” Moyo was quoted as saying.

The Herald article went on to blame the measures for the loss of jobs and livelihoods in Zimbabwe, the collapse of the currency and economy, “sanctions induced” hyperinflation, and even the cholera epidemic of 2008.

Respected independent economist John Robertson moved to counter this spin, telling SW Radio Africa on Tuesday that it was the destructive policies of the ZANU PF government that led to hyperinflation, the collapse of the economy, and the other problems that followed.

“Hyperinflation was caused by the incredible level of indiscipline of the Central Bank and its efforts to justify and bolster the various measures by the government, which were so damaging to the country’s productive capacity,” Robertson said.

He explained that hyperinflation “was the result of a sequence of events that started with the land reform programme, which led to the collapse of the agriculture sector, which was the most important and most profitable sector in Zimbabwe.”

“The reason for the collapse in financial terms was because of the removal of the collateral value of the land. The land was previously pledged by land owners as collateral, but with no market value on the land (after land reform) because it then became land that belonged to the state, the land could not support loan applications from new farmers,” Robertson said.

He continued: “The Reserve Bank was obliged to fill in the gap and provide inputs and financial support to the new farmers. So the Reserve Bank was responsible for generating vast amounts of money that was handed over in support of efforts to make land reform successful, but it still wasn’t successful.”

The economist went on to say that using ‘sanctions’ as the scapegoat for issues like the cholera epidemic was a “twisted piece of logic.”

“Sanctions are not applicable in this story…these sanctions did not affect the economy directly. It was lack of earnings from the exporting companies (which collapsed after the land reform programme) that meant there was a shortage of money. The lack of money was because we were no longer earning it. All of these were affects of land reform, not effects of sanctions,” Robertson said.

In April 2013 Water Resources Development and Management minister, Samuel Sipepa Nkomo, told delegates at a two-day Zimbabwe Water Infrastructure summit that it was now common for drinking water to be mixed with sewage effluent in urban areas, exposing residents to diseases such as cholera. He said: “The sporadic water supply in urban areas is largely due to old infrastructure not able to satisfy demand. There has also not been systematic investment in new water sources. There are frequent instances of sewage mixing with potable water.”

Nkomo said the dilapidated infrastructure led to the cholera outbreak of 2008-2009, which killed more than 4,000 people.

ZANU PF has put no resources into repairing this infrastructure, despite the vast earnings from the diamond mines, controlled by the Chinese, the military and ruling party chefs.