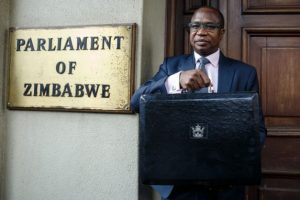 It is the Senate’s Turn to Sit This Week

The Minister of Finance and Economic Development  presented his Mid-Term Fiscal Policy Review Statement in the National Assembly on Thursday 16th July.  The Minister’s speech is available on the Veritas website [link].

No Supplementary Budget necessary  The Minister was able to report that Ministries have on average utilised 46% of their votes as at June 2020, meaning that 54% of the original 2020 Budget remains for the next six months of the financial year.  For the period January to June 2020, a budget surplus of around ZWL$800 million had been realised.  He would not, therefore, be presenting a Supplementary Budget because the remainder of the 2020 Budget would enable the Government “to operate to the end of the year as we reallocate to cover the critical needs, especially those related to COVID-19 and social protection”.

This means that there will be no mid-term Estimates of Expenditure to be considered and no Appropriation Bill.

Finance Bill to be introduced  There will, however, be a Finance Bill, the departmental draft of which was tabled by the Minister when he presented his statement.  The Bill will take care of changes to tax laws mentioned by the Minister, such as the raising of the tax-free threshold to ZWL$ 5000 and the widening of the income tax bands.  It will be available on the Veritas website soon.

Immediately after the Minister’s presentation the Speaker adjourned the House until Tuesday 28th July, when debate will continue.  In the meantime – while the Senate takes its turn to sit this week – members of the National Assembly will have ten days recess in which to digest the implications of the Minister’s statement.  The Portfolio Committee on Budget, Finance and Economic Development was due to meet yesterday, Monday 20th July in order to deliberate on the statement.  The committee’s reaction will be reported to the House early in the debate that will take place next week, beginning on 28th July.

Other Business in the National Assembly Last Week

No progress was made on the several Bills waiting for the House’s further attention, as listed in Bill Watch 46/2020 dated 10th July [link], including the Constitution of Zimbabwe Amendment (No. 2) Bill.

On Tuesday 14th July two reports were presented and discussed, taking up the whole sitting until the adjournment at 6.19 pm:

On Wednesday 15th July after Question Time one report was presented:

On Thursday 16th July before the presentation of the Mid-Term Fiscal Policy Review Statement one report was presented:

Copies of the above reports will be posted on the Veritas website when they become available.

On 16th July the Deputy Speaker informed the House that Hon Paurina Mpariwa had been appointed as the new National Assembly Chief Whip of the MDC-T Party [replacing Hon Prosper Mutseyami], with Hon David Tekeshe as her deputy [replacing Hon Nomathemba Ndlovu].  Note: these appointments fill vacancies left by MDC-T’s “recalls” of Hon Mutseyami and Hon Ndlovu; both have applied to the courts for the setting aside of their  “recalls” and resulting loss of their seats.

As the new Chief Whip of the party, Hon Mpariwa would also be an member of the Committee on Standing Rules and Orders [CSRO].  Note  Section 151(2)(f)  of the Constitution provides that “the chief whips of all the political parties represented in each House” are CSRO members.

One Minute Statements by Backbenchers

An innovation in the 2020 edition of Standing Orders [still not available to the public] is the provision in Standing Order 60 allowing MPs who are not Ministers to make One Minute Statements during the first twenty minutes of each sitting.  Such statements must be on matters of public importance, as the Deputy Speaker reminded MPs on 14th July.

First-time vehicle registration fees in US dollars  Hon Mushoriwa immediately made good use of the Standing Order to criticise the Minister of Transport and Infrastructural Development’s recent statutory instrument requiring first-time registration fees for motor vehicles to be paid in US dollars.  He said it was wrong in a country where most people earn a living in RTGS dollars for the Government to allow a Government department to charge fees for a service in foreign currency.  Note The statutory instrument concerned is SI 166/2020, the Vehicle Registration and Licensing (Amendment) Regulations, 2020 (No. 21) [link].

Coming up in the Senate This Week

Constitution of Zimbabwe Amendment (No. 1) Bill (2017) – Repeat of Third Reading

Is this the week when the Minister of Justice, Legal and Parliamentary Affairs will attempt to muster 54 affirmative votes from Senators in the repeat of the Third Reading vote ordered by the Constitutional Court in its decision of 30th March this year?  For the background, please refer to Bill Watch 27/2020 of 13th May [link].

The deadline for a valid vote [54 affirmative votes] set by the Constitutional Court was 29th September.  If a valid vote is not achieved by the deadline [or a possible extension based on the Chief Justice’s COVID-19 Practice Directions applying to all court-ordered time-limits], the court’s declaration of the Bill’s nullity will come into force – and the Act resulting from the Bill will also become null and void.

Constitutional Court Bill [as amended by the National Assembly]

This Bill is not yet on the Order Paper, but it is the only Bill passed by the National Assembly and transmitted to the Senate during its recent recess.  It is expected to be dealt with by Senators this week.  The only amendment made by the National Assembly to the original Bill was the insertion of a few words in clause 13 of the Bill, thus [inserted words underlined by Veritas]:

Subject to section 85(1) of the Constitution and any other law, in all proceedings before the Court the parties may appear with or be represented by a legal practitioner.”

Section 85(1) of the Constitution lists the persons who may apply to any court for the enforcement of fundamental human rights and freedoms.]

There are a number of adjourned debates in progress  on motions already moved, including Senator Makone’s motion calling for the abolition of the death sentence and the repeal of provisions for it in the Criminal Law Code and other Acts of Parliament.