MDC Statement on the escalating crisis

Source: MDC Statement on the escalating crisis – The Zimbabwean

Zimbabwe is back to square zero, the wheels have come off completely just five months after the sham election of July 30 2018 and over a year since the departure of Robert Mugabe. 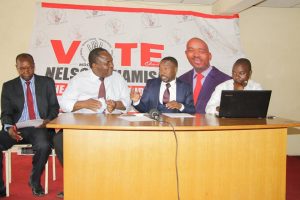 The not so new actors have failed our people; the country finds itself in the prison of a deep structural economic crisis of malaise, capture, corruption, coercion and stagnation.

There is a huge fiscal crisis, lack of confidence, lack of trust, a crippling liquidity crisis, total social sector collapse and the old challenges of macroeconomic stability hitting rock bottom.

This is coupled by habitual dereliction of duty by those who stole the election, a shocking display of mediocrity and total misunderstanding of statecraft by some major players in government. Those with some idea lack the spine to look the beast in the eye and execute the necessary decisions which serve the interests of the working people in Zimbabwe.

In this statement the MDC wishes to address the following areas of urgent concern, President Nelson Chamisa will in the next few days address in detail the MDC Agenda of 2018 highlighting major steps Zimbabwe will have to take going forward.

It is the convergence of these three crises that have created a deadly cocktail that requires a major paradigm shift in the way the economy is run, the way of doing politics and the governance culture in Zimbabwe.

The Political Crisis
At the centre of the government’s failure to deliver is the legitimacy question following the false start of July 30 2018 which blew the opportunity to cure the legitimacy question. The MDC has made this point over and over again highlighting that the solution lies in President Chamisa’s five point plan.

Worsening this crisis is the confusion which is now manifest in the Zanu PF cockpit including its presidium. At one point the public is told that Dambudzo Mnangagwa is back on duty and the next day the government says he is still on leave while one Guvheya Chiwenga continues to sweat in the kitchen of power literally and metaphorically.

This confusion is toxic as it exacerbates an already volatile situation.  A government at war with itself is the biggest enemy of the people.

This confusion is directly linked to the factional fights in Zanu PF especially the public spat in the Ministry of Information between Energy Mutodi, Monica Mutsvangwa and Nick Mangwana.

The Economy
The 2019 Budget has failed to cure structural challenges in the economy, instead the budget has created more confusion than answers especially in areas of the currency and its relationship with government tax.

The tripod exchange rates and pricing system owing to distortions caused by the bond note has reached the peak. Shortage of basic goods including fuel and cooking oil is worsening each passing day.

Inflation is unabated causing more suffering to the Zimbabwean people, bread prices are set to go up once again.  Actual figures are suppressed with government choosing to stay in denial and presenting a macro-economic framework with distorted figures even by the standards of the generous ZIMSTATS.The budget deficit keeps ballooning, while there is no solution to the debt crisis while government keeps announcing new lines of credit most of which are funding non-capital ventures.

Zimbabwe suffers from massive corruption, nepotism and state capture. Recently a statutory instrument was gazetted merely to forgive taxes owed by a single Chinese company in a murky move with no official explanation to the people.

This happens in a situation where the government is taxing Zimbabweans to death, the introduction of the 2% tax completed the creation of a predatory robber state which pick pockets the poor.

The Social Crisis
The health sector has collapsed, there are no drugs in hospitals and a crippling industrial action by Medical Practitioners which has gone beyond a month.

The government especially Chiwenga has created a mess and failed in absolute terms to bring an urgent solution to the impasse, instead the government went to court and then prematurely suspended 530 Medical Practitioners.

Chiwenga even went on overdrive calling them names and referring to them as mere interns yet contradicting himself by saying the interns are not saving lives.

In diplomatic terms Mnangagwa accepts that his deputy has failed to deal with this issue therefore cutting his vacation short although no significant change has been seen.

Lives continue to be lost unnecessarily and the doctors have even stopped to attend to emergency cases.
The negotiations are being handled by insincere people who want to score cheap political points, the sector has become a risk to the workers who are supposed to work with no protective clothing.

There is a looming nationwide strike across the public sector with the government refusing to pay its workers in US dollars yet they are collecting various taxes in hard currency. They even afford to allocate forex to Delta Beverages, an economy cannot be run through attending only those who cry the loudest.

In the education sector a crisis is brewing as tuition is being charged in forex, uniforms are expensive and the parents have only RTGS sources of income. Teachers marched to Mthuli Ncube’s office towards the end of the year, there is a risk they are not returning to work.

The cost of living has increased, even the cost of going to work has become unbearable for workers and notices of industrial action have already been circulated.

Instead threats have been issued by officials from the Ministry of Information to the effect that repressive state apparatus will be unleashed to suppress labour’s exercise of its Constitutional rights in section 59 of the supreme law.

1. That Dambudzo Mnangagwa admits failure and kick starts a process of National Dialogue towards a lasting solution to the problems arresting our country.

2. That government fixes the health sector and save lives of Zimbabwean citizen.
3. That an honest, urgent economic recovery plan be produced and implemented
4. That part of the US dollars generated by the government be used to pay public servants against a background of rising costs of living.
5. A lasting financial solution be adopted, the MDC has already stated that the following solutions be adopted.