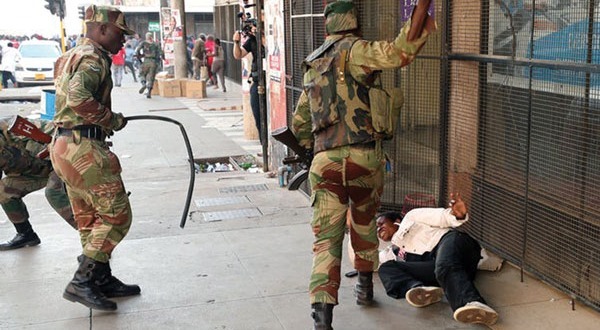 PRESIDENT Emmerson Mnangagwa has pledged to continue improving security forces’ working conditions in “recognition of the role and sacrifices” they have made “in the conduct of their duties”.

In his Defence Forces Day speech in Harare yesterday, Mnangagwa warned the opposition against advocating for violence while also blaming sanctions and COVID-19 for the faltering economy.
“I am aware of the sacrificial nature and service ethos of the Defence Forces, however, my administration remains determined to improve the salaries and conditions of service for our forces,” he said.

“Housing, transport and medical facilities among other requirements are being improved in recognition of the role and sacrifices made by our Defence Forces in the conduct of their duties.”
In June, Defence minister Oppah Muchinguri told Parliament that morale among members of the Zimbabwe National Army had hit rock bottom as a result of the failing economy.

She said many were now forced into corrupt activities to make ends meet, while there were no proper medical facilities in the camps.
Mnangagwa last month pampered soldiers with allowances ranging between $7 000 and
$8 000, while other civil servants got much less in what observers said was to appease the military element, a vital cog in Zimbabwe’s power dynamics.

Added Mnangagwa: “Thank you once again for remaining calm and peaceful in the wake of some misguided calls for violent protests and demonstrations by the opposition elements with support from foreign and civil society supporters and backers. You have shown your patriotism and love for peace and tranquility.

“This occasion is happening on the backdrop of successive accomplishments by our Defence Forces to defend our motherland Zimbabwe from detractors, divisive elements and enemies.
“They are taking place under yet another wave of aggression manifesting through illegal sanctions, hostile anti-Zimbabwe propaganda mounted on social media platforms, and other forms of asymmetrical warfare meant to break the unity within our forces.”

Mnangagwa has been consistent with the narrative that Zimbabwe was under siege from Western nations, diplomats, the opposition and civil society who were plotting to overthrow his government.
He also accused some from within his party of planning a coup and sabotaging the economy.
There has been a massive campaign on social media under the #ZimbabweanLivesMatter banner where the Mnangagwa administration has been admonished for human rights abuses.

Mnangagwa has been accused of using the cover of COVID-19 lockdown regulations to shrink the democratic space, forcing several opposition leaders into hiding.

Journalists have also not been spared with Hopewell Chin’ono languishing in remand prison, together with Transform Zimbabwe leader Jacob Ngarivhume.

ZimLive editor Mduduzi Mathuthu is in hiding after State security agents pounced on his house looking for him, before they abducted his sister and three nephews.

Chin’ono and Ngarivhume, who are facing charges of inciting violence, have now been transferred to Chikurubi Maximum Security Prison where, according to their lawyers, were being treated like hard-core criminals.
“Our battle with the COVID-19 pandemic requires discipline, bravery and unity which are embodied in the personalities we are celebrating today. We must be united and fight this invisible enemy together. It is our collective responsibility to protect our nation, our families and our beloved ones,” Mnangagwa said, adding that citizens must co-operate with the security services as they enforce national laws.

Newer Post
Zimbabwe is in the vicious grip of a failed liberation movement, says Numsa
Older Post
Inmates sleep in the open at Mutare quarantine centre