It’s still not certain whether MDC leader Nelson Chamisa will agree to appear before a commission of enquiry into deadly post-election violence this week, a party spokesperson has said. 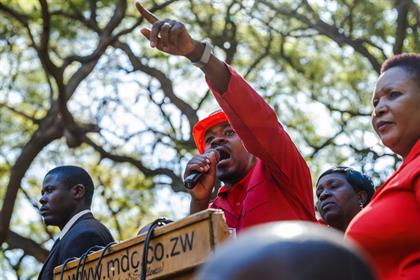 It’s still not certain whether MDC leader Nelson Chamisa will agree to appear before a commission of enquiry into deadly post-election violence this week, a party spokesperson said on Tuesday.

Chamisa and other top MDC officials were last week summoned to appear on Wednesday before the seven-member commission led by South Africa’s Kgalema Motlanthe.

MDC spokesperson Jacob Mafume says the party has written to the commission requesting a transcript of a testimony by one of the witnesses who is said to have accused Chamisa of inciting violence that led to an army crackdown on August 1 that left six civilians dead.

“We need certain information from them before we make the final decision to attend,” Mafume told News24.

“We have requested a transcript of the particular testimony,” he added.

The MDC has previously called the commission a sham, and said some of the commissioners are likely to be biased against the party. Last week Chamisa said the MDC had nothing to do with the violent protests that rocked Harare two days after the disputed July 30 poll.

He angered many on social media here when he accused the protesters of being “stupid” for taking to the streets before presidential election results were announced.

Last week top army and police officers claimed that soldiers did not fire on civilians in August 1. Instead, some of them claimed that MDC activists could have used their own weapons to carry out the killings.

Mafume said the MDC is still insisting that if Chamisa is forced to appear before the commission, then President Emmerson Mnangagwa and Vice President Constantino Chiwenga should also attend.

“He (Mnangagwa) is the commander in chief (of the defence forces), he is the one who deployed he must allude to the instructions that he gave to the people whom he deployed,” Mafume said.

Mnangagwa’s spokesperson George Charamba told the state-run Herald on Tuesday that Chamisa had no choice but to testify before the commission.

“The best favour he can do to himself is to go and put his own side of the story before the Commission,” Charamba was quoted as saying.

“We want to establish the facts and soon after the facts have been established, prosecutorial action will be taken because we have lost lives,” he added.